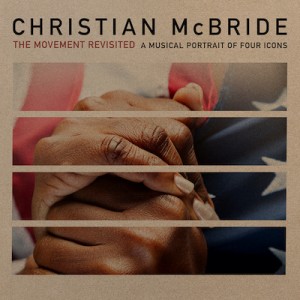 Christian McBride has been at work on The Movement Revisited: A Musical Portrait Of Four Icons in one way or another since 1998; the version heard here was recorded in 2013. So, a lot has changed in the States, as well as in music, since this document was made. An hourlong commemorative suite devoted to four heroes of the civil rights and Black Power movements, the album arrives in a nation reeling from the brutal backlash to its first black president.

When the suite soars, it follows the bandleader’s strengths. The leading upright bassist of his generation, McBride is known for his ebullient precision—his joy in the details—and for savoring the nectar inside swing rhythm. This comes through strongest in his small groups, though he ought to be more recognized for his broad-minded writing for jazz orchestra, too.

On Movement, a version of the Christian McBride Big Band joins up with the Voices of the Flame, a gospel choir, singing arrangements by J.D. Steele. The suite is organized into four overlapping sections devoted to Rosa Parks, Malcolm X, Muhammad Ali and Martin Luther King Jr. In each, an actor or poet reads from speeches or writings by the historical figure. Just as he blends musical styles—the overture, for instance, crescendos from stern piano chords to a passage of outright swing to a clave-inflected vamp—McBride laces together the stories of the four historical figures, always letting the words of one introduce the next.

In the past few years, it’s become common for jazz musicians to superimpose words over their music, making their ideals and inspirations more explicit. At the same time, McBride is speaking back to a canon of recordings from throughout jazz history that have relied on big bands and big voices to get a point across—Archie Shepp’s Attica Blues, Bobby Hutcherson’s Now!, Max Roach’s Percussion Bitter Sweet.

But to a degree, he misses an opportunity: Movement treats the music a bit too much like a text of its own. For all their precision, these arrangements feel more like background and less like a force.