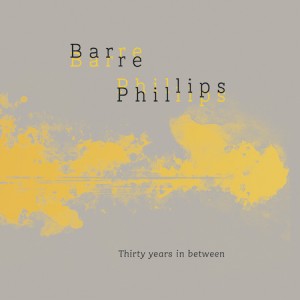 Barre Phillips has been releasing solo bass recordings for about 50 years. And while an unengaged listener might just take away the idea that he’s careened from screech to screech and back again during that time, there’s a lot more to take in.

Maybe some of the most malevolent sounds Phillips cajoles from his instrument on Thirty Years In Between come off like wildlife field recordings interspersed with arco finesse. But there’s a train of thought here, the first of two discs offered with an occasionally more percussive approach to bass, Phillips testing the tensile strength of strings on “A Quake’s A Comin!” during a 2019 appearance at Festival International de Musique Actuelle de Victoriaville. For disc two, an audio document from a Vancouver, Canada, venue in 1989, Phillips coaxes a different sort of brooding elegance from his instrument: “Camouflage” presents as something akin to nervy “new music.” But the sum total of this—as well as his solo works for the ECM imprint that supposedly concluded with the 2018 album End To End—feels like the examination of a core sample, offering the chance to deeply study the layers of sediment, the rocks, their coloration and whatever debris has been collected during the decades and centuries that’ve flown by.

With Thirty Years In Between, if you listen closely enough, maybe you can discern flecks of Peter Brötzmann or Barry Guy, Paul Bley or Keiji Haino, all collaborators during Phillips’ decades of exploration.