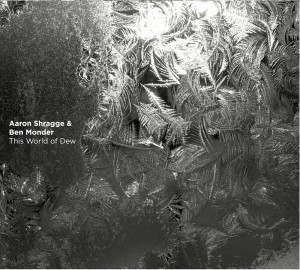 This duo does not wander far from one’s expectations of a “jazz album” featuring an electric guitar and a shakuhachi. Multi-instrumentalist Aaron Shragge also plays his custom-made dragon mouth trumpet, which doesn’t so much spit fire as soar above the clouds. There’s a lot of water imagery on this ethereal album—in all states. The title evokes small droplets of moisture, while the cover depicts them shattered and preserved as ice.

It is extremely difficult to fill an album with this instrumentation; this duo pulls it off admirably. Lines blend into each other, and aside from the jarring start to “Stink Worm,” the duo eases into most of the scenarios here. When Shragge takes to the trumpet, he evokes a noir backdrop, the sounds becoming woefully human, at times pained, but always searching. In response, Monder mostly remains even-keeled, churning in short bursts, but mostly letting his guitar ring out into the ether. This World Of Dew isn’t about flash, it’s an album of patience and communication. But it is mesmerizing in its lack of urgency, rewarding the listener through subtlety rather than flare.

This World Of Dew: Companion; By Rain And Mud; A Tiny Boat; This World Of Dew; There Is Always One You Follow; Stink Worm; Pretending Wisdom; Roll The Dice; Nothing In The Cry; It’s Ours; Old Dust; Settling; Blue Bird; Sun Coming Down. (62:48)
Personnel: Aaron Shragge, dragon mouth trumpet, flugelhorn, shakuhachi; Ben Monder, guitar.