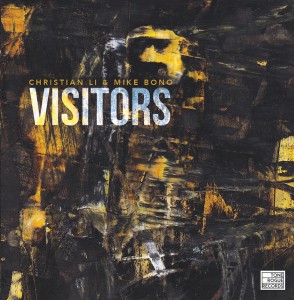 Though credited to a duo, the identity of this album changes considerably depending on who else is joining pianist Christian Li and guitarist Mike Bono in the studio.

The pair never actually plays as a duo here, getting closest during the final track, “Heart,” a sparse fadeout that eventually is intruded upon by Chris Marion’s searing strings. But tenor saxophonist Dayna Stephens dominates the opening declaration, “Puddles,” as a forceful triple meter lets him run wild on the upbeat tune. The performance serves as compelling straightahead credentials for the co-leaders, even before Stephens energetically returns for the title track. The quintet moves with purpose, drummer Lee Fish getting a few hits in during that latter composition. The band sheds its niceties by the second track, though, Alex Hargreaves jarring violin jolting the troupe into freer territory for “Little Rascals.” It grinds hard, though the tune—weaving with intermittent intensity—finally locks in during the last few seconds with a chunky, menacing riff.

Bono brings the band back to the groove on “Tango,” not exactly a dancefloor number, but possessing its own pulse. The band makes a hard left turn on “Space Invaders,” an unsettling conjuring of Martians in front of a console’s frayed circuits, under low, flickering light. The band gets far-out, before embracing an Ed Wood-like, flying-pie-pan kind of sci-fi vibe. It’s piercing and discomforting, and miles away from the band that just had been popping along. Li and Bono wrote each of the nine of the tracks on Visitors, but it’s a stretch to sense much cohesion from track to track.