Blue Note Documentary a Jazz Film with a Hip-Hop Heart

Swiss-born director Sophie Huber’s Blue Note Records: Beyond the Notes (Eagle Vision), which coincides with the label’s 80th anniversary, supports the canard that good things come in threes. However, the film stands in contrast to both It Must Schwing: The Blue Note Story, by Eric Friedler, a German—which portrays label co-founders Alfred Lion and Francis Wolff from the perspectives of the musicians they documented—and I Called Him Morgan, in which Kasper Collin, a Swede, traces the relationship between iconic Blue Note trumpeter Lee Morgan and the woman who shot him in 1972. Huber examines the ways in which the members of Blue Note’s hip-hop-informed 21st-century roster connect, aesthetically and emotionally, to the classic albums that established Blue Note’s indelible brand.

“I knew from the beginning that I wanted to talk to the younger artists not only about what’s happening now, but to directly understand how alive the influence of the artists of the past still is,” Huber said. As examples, she mentions Scott’s account of his “conversion experience” after hearing Art Blakey on A Night At Birdland (1954), and Strickland’s paean to John Coltrane’s Blue Train (1958).

The project began in 2015, after an inquiry from Was, who’d played bass on the soundtrack to Huber’s first documentary, Harry Dean Stanton: Partly Fiction. “My dad had a lot of jazz records, and the music always intrigued and invigorated me,” she said. “But what made Blue Note different was the aesthetics.” Huber was referring to the “timeless, perfect combination” of Wolff’s distinctive photographs and Reid Miles’ album cover design, which she deploys prominently in propelling the film’s narrative flow.

“Then I discovered that Blue Note was founded by two German-Jewish refugees,” she added. “In a time when xenophobia and racism are moving to the forefront, it was important to tell a story about immigrants and African Americans who created a legacy as powerful and vital today as it was then.”

The process of winnowing down hours of footage to an 85-minute film “that would hopefully appeal to younger people, and people who don’t necessarily know much about jazz, or like it, or even know that they like it” necessitated difficult editorial decisions.

“I tried to at least show an album cover, so that [many artists’] names come up,” she explained. “But I chose to be present and look into the future, rather than go into detail about the past. I hope people will be interested enough to dig deeper and find out more, as the wealth is vast.” DB 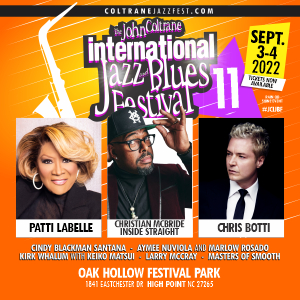