The free festival, curated by the non-profit Jazz Institute of Chicago, attracted tens of thousands to day-long programming at three side-stages as well as evening concerts in the Frank Gehry-designed Pritzker Pavilion and sound-reinforced field.

Of 58 bands performing, 42 were from Chicago, but the schedule duly represented jazz’s breadth, bringing to town New York City groups such as guitarist Mary Halvorson’s octet and saxophonist Donny McCaslin’s band (of David Bowie–backing fame). South Africa-via-England was represented in drummer Louis Moholo-Moholo’s London-based “Four Blokes,” and saxophonist Jonathan Doyle brought his trad-jazz ensemble, the Swingtet, all the way from Port Townsend, Washington. For a finale, audiences were transported to New Orleans courtesy of the Rebirth Brass Band.

In performance, Chicago native Mitchell, a longtime professor at California’s Mills College, was in a take-no-prisoners mode. Blowing high and fast, the 77-year-old reedist squeezed squeals and squiggles from his soprano saxophone on a low-key melody, leading into unaccompanied solos by his crew and collective improvisations that ranged from delicacy to rage.

Among Mitchell’s septet of colleagues old and new were trumpeter Fred Berry, now director of the Stanford University Jazz Ensemble, and drummer Alvin Fielder, whose rhythms still dance. (Both can be heard on Nessa Records’ 2011 release of Mitchell’s pre-Art Ensemble tracks, Before There Was Sound.) Second drummer Vincent Davis, splashy on cymbals, has worked in trio with Mitchell and bassist Junius Paul—who during the unannounced pieces plucked when fellow bassist Jaribu Shahid bowed, and vice versa. Also present was cellist Tomeka Reid, who used both arco and pizzicato techniques. The group’s coherence and command were evident at the extremes of volume—indeed, its audience remained rapt when one piece settled into sheer silence. 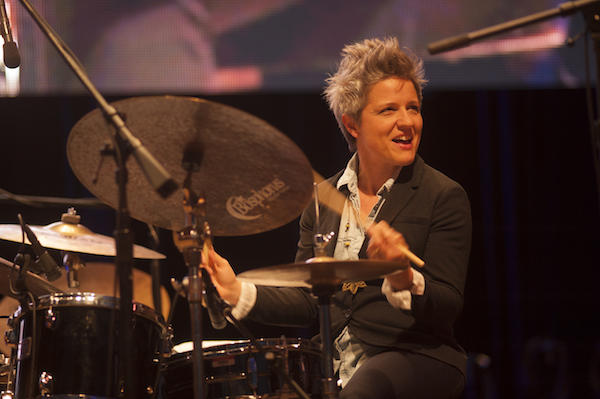 Vocalist Dee Alexander, regarded as the Second City’s Sarah Vaughan, delighted in an “Ellebration” of Ella Fitzgerald’s centenary, in which she was joined by fellow Chicago singers Frieda Lee, Spider Saloff and Paul Marinaro, as well Sheila Jordan (who had her own hour, accompanied by pianist Steve Kuhn’s trio).

But the fest’s most thrilling, thoroughly modern jazz was delivered by Faddis and his orchestra of four New York ringers and Chicago stalwarts. They had bonded in one rehearsal. The trumpeter—a teenage protégé of Gillespie—conducted with confidence and perfect comedic timing. Besides being an entertainer who is willing to get spontaneous and downright silly, Faddis is an ace instrumentalist and interpreter who expressed himself brilliantly on Gillespie’s “Tanga.”

Faddis also employed his incomparable upper register chops to fine effect on “Night In Tunisia” (otherwise a feature for the four-piece trombone section); “Things To Come,” on which alto saxophonist Antonio Hart was voracious, churning chorus after chorus; and “Manteca,” a showcase for bassist Todd Coolman, drummer Ignacio Berroa and pianist Willie Pickens, who, at age 86, is one of the Windy City’s most prized jazz stars.

Like Pickens, much of the homegrown talent featured at the Chicago Jazz Festival is little-known beyond the city. Not all great musicians tour the world. But listeners should be grateful for such excellent opportunities to check out great scenes like the one in Chicago. Three festival sets were broadcast live by local radio station WDCB, and more are being produced for eventual airing on the Jazz Network, distributed by WFMT. DB