A young native of Los Angeles and an adopted icon of the city shared a double bill at the Hollywood Bowl on Aug. 23 that demonstrated what a big tent jazz can be.

Between icon Herbie Hancock and highly touted newcomer Kamasi Washington, there was a rainbow of cross-generational possibilities onstage—sonically, stylistically and culturally. But for all the good feeling and manifest virtuosity on display that night, not all of those possibilities were realized musically. Still, Hancock proved that age is just a number when it comes to visionary energy, as the 77-year-old led his new electro-acoustic quintet through a bracing set of futurist funk. By the end, he was out front with his keytar, summoning sounds like a shaman plugged into an everlasting power source.

Hancock—born in Chicago but a Los Angeles resident for decades—is surely the most lauded of any living jazz artist, with 14 Grammy awards, an Academy Award and such current positions as the Los Angeles Philharmonic Creative Chair for Jazz and the Chairman of the Thelonious Monk Institute of Jazz. His music has ranged from timeless soul-jazz favorites on Blue Note and a tenure in the epochal mid-’60s Miles Davis Quintet to widely influential avant-funk recordings, pioneering synthesizer work and chart-topping electro-dance hits. He has crossed over audiovisual divides from jazz to pop and back again, exploring classical and world sounds to boot.

Martin—another native Angeleno and one of the producers of rapper Kendrick Lamar’s multiple Grammy-winning To Pimp A Butterfly album—has been tapped by Hancock to helm his next record. It’s hard to imagine Hancock needing much help in the studio, but while introducing the band, the veteran extolled Martin’s talents, saying, “I’m not going to let him get away.”

Martin, Loueke and Hancock each sang at various points of the set, though all the vocals were processed through vocoder effects that, by night’s end, had grown wearying. However, Hancock was magic as he switched from heady acoustic improvisations on his Fazioli piano to pitch-bending and atmosphere-stoking on his Korg Kronos synth. There was zero resting on the leader’s considerable laurels, from the opening “Overture” (freaky washes of sound from Hancock’s synth and Loueke’s guitar before Colaiuta’s precision-tooled backbeat kicked in) to the loping funk of the encore, “Chameleon.”

In between, one song bled into the next, the set’s hyperdriven fusion marked by hard rhythms and dense textures. Hancock called “Actual Proof,” his vintage Headhunters tune, “a flashy one,” and the performance lived up to that description, with Genus and Colaiuta taking epic solos during the heavy-metal remake. The drummer’s hard-hitting sophistication was particularly impressive, although one couldn’t help but imagine how a more lithe-sounding drummer might have made the band feel less relentless.

Introducing Loueke, Hancock said, “What comes out of his guitar—it sounds like a team of people. No one in the world can do what he can do.” Loueke indeed conjured a universe of music on his guitar, from grainy wah-wah and spacey sound-clouds to lyrical guitar-synth and even a searing, rock-like solo in the funhouse version of “Cantaloupe Island.”

Martin’s extended alto solo played dynamically off the song’s famous rhythmic-melodic hooks, making for one of the evening’s standout improvisations. By the time “Chameleon” rolled around—with the leader showing how the keytar can be every bit a jazz instrument, at least in his sage hands—one marveled at how, even as a younger generation looks to Hancock’s past for inspiration, he keeps on searching. His mind is as open as his fingers are nimble.

Washington was a star player at the Hamilton High School Music Academy here and studied ethnomusicology at the University of California–Los Angeles before going on to play with the likes of trumpeter-bandleader Gerald Wilson, as well as Kendrick Lamar and Snoop Dogg. The tenor saxophonist, born in 1981, garnered raves in jazz and beyond for his triple-disc 2015 album, The Epic (issued via Brainfeeder, the label of L.A. electronica artist Flying Lotus). 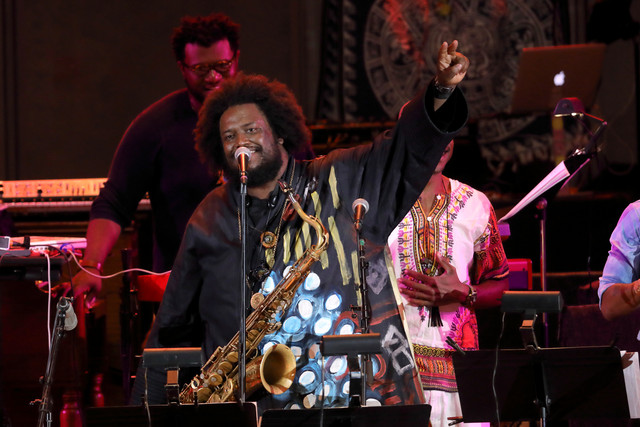 Mine may be a contrarian view—the hometown crowd was with him all the way—but Washington often convenes maximalist means to minimal ends. His compositions aspire to a kind of spiritual-minded, r&b-accented uplift, but there’s little dissonant shade to help one appreciate the diatonic light; many of the pieces seem to start at the relief of sunshine, without any clouds of struggle. The orchestrations tend to be overblown, the harmonies pastel, the melodies slight.

For “The Magnificent 7,” from The Epic, Washington said he was going to “release the fire in the band,” but the music mostly sounded like something from a ’70s TV soundtrack. That said, there was some grit to Miles Mosley’s long double-bass solo, his instrument tweaked with electronics that built to a bowed climax evoking distorted rock guitar.

Washington had family and friends in the band—including his father, Rickey Washington (soprano saxophone and flute), and former schoolmate Cameron Graves (piano)—and he noted how his orchestra and its music underscored an ideal of community that he grew up on in multicultural Los Angeles. “Diversity is not something to tolerate—it’s something to celebrate,” he said, prefacing the live premiere of “The Truth” from Harmony Of Difference.

In that spirit, Washington spread the spotlight generously when it came to solos, and his tenor features often had more in common with the levity of r&b than the challenges of jazz. But his almost childlike wonder in the potential of spectacle and color in music has its virtues, along with that sense of community.

There’s no doubt that Washington has a considerable profile—he’s currently signed to the alternative-oriented, Beggars Group-distributed Young Turks label. If he develops a sharper edge to his sound, his music may become more reflective of our dissonant times. DB