Producing and presenting a multi-act show with limited rehearsal time and a broad repertoire can be a tricky proposition. That SFJAZZ in San Francisco was able to pull off a program worthy of an official live recording or an all-star tour for its 2017 gala on Jan. 18 was certainly impressive.

On a night characterized by glamour and dramatic bouts of rain, the musical choices showcased for both the host venue SFJAZZ Center, which had its grand opening on Martin Luther King Day 2013, and SFJAZZ’s 34-year history. The event, which honored percussionist Zakir Hussain with a Lifetime Achievement Award and benefited the organization’s artistic and educational efforts, even included a few surprises. Continuity and community emerged as two themes on the set list and bandstand.

Tenor saxophonist David Sánchez slowly walked down the stage left stairs to the ground floor while playing an extended introduction to his “Canto #1,” the piece he wrote for the Collective’s 2016–’17 season.

Afterwards, Gala Chair Timothy Dattels spoke briefly about SFJAZZ’s mission and accomplishments and gave a quick overview of Hussain (whom he called “an architect of the global music scene”) before introducing SFJAZZ Founder/Artistic Director Randall Kline. Kline expounded on the organization before bringing to the stage another San Francisco musical institution, the Kronos Quartet, which played R.D. Burman’s “Tonight Is The Night” with Hussain.

From there, the instrumentation was switched up throughout the night. The Collective performed member Miguel Zenón’s arrangement of “Nardis” by Miles Davis, the artist whose repertoire is being explored by the octet this season. Tenor saxophonists and ex-Collective members Joe Lovano and Joshua Redman burned through the former’s “Blackwell’s Message” with Penman, Harland and Santos.

The gala concert also served as an overture of sorts to the four nights of Season 5 Celebration shows, with the bulk of the musicians returning the following four nights to spotlight the legacies of Tony Williams, Joe Henderson, Bobby Hutcherson and John Handy, who all lived or live in the greater San Francisco area.

“Lil’ B’s Poem” by Collective co-founder Hutcherson, was performed by Collective alumnus Stefon Harris on vibraphone and prior SFJAZZ RAD Bill Frisell on guitar, along with Zenón, Penman, Harland and Santos. The strings and percussion arrangement gave one of the late vibraphone/marimba maestro’s signature compositions an atypical chamber jazz aesthetic.

Vocalist Mary Stallings, a San Francisco native and 2011 SFJAZZ Lifetime Achievement Award recipient, sang “Angel Eyes” while backed by a quartet of Harland, Penman and Sánchez, who had a haunted, noirish solo. Wayne Shorter, who was recognized with an SFJAZZ Lifetime Achievement Award in 2008 and whose work was interpreted by the Collective during that 2008–’09 season, was represented by his “Footprints” with Redman and trumpeter/former RAD Terence Blanchard on the front line.

Commissioned by SFJAZZ in 1991, late drummer Williams’ “Rituals” featured the Kronos Quartet (which performed its premiere), Cindy Blackman Santana in the composer’s drumming role and Simon in place of Herbie Hancock. Blackman Santana, who curated and led the following night’s Williams tribute show, started with an intense and flowing unaccompanied exploration on her toms. 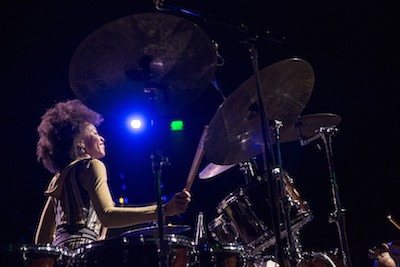 Kline referenced the great collective group with Lovano, Frisell and the late drummer Paul Motian before revealing that a trio with the two surviving members plus Harland would perform a medley of the late drummer’s “Dance” and “It Should’ve Happened A Long Time Ago.” Blanchard gave a fiery quartet reading of “Caravan” with his former bandmates Simon and Harland as well as Penman, while alto saxophonist Handy, who was honored in concert on Jan. 15, and Hussain performed a duo version of his “Alamo Suite, Part 2.”

A video about Hussain (directed by Anisa Qureshi, his daughter) with testimonials by everyone from banjo ace Béla Fleck to reedist Charles Lloyd to San Francisco Symphony Music Director/Conductor Michael Tilson Thomas preceded Grateful Dead drummer Mickey Hart speaking at length about his longtime friend and collaborator, whom he said is both a master and a lifelong student. (“A master student,” Hussain quipped.) 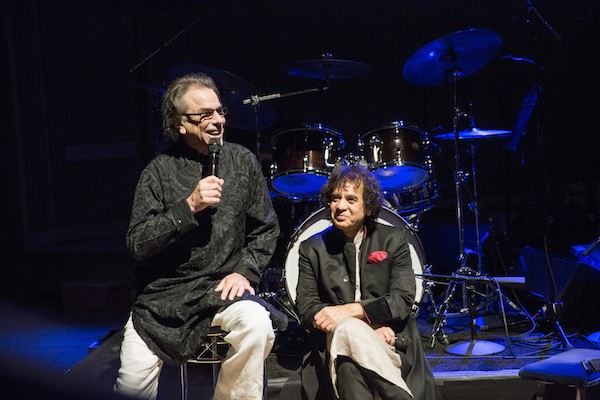 “I am not worthy of this, but I hope I’m worthy of the blessings it contains,” Hussain replied when receiving the SJAZZ Lifetime Achievement Award.

For the final, extended number, Blanchard, Harland, Calvaire and SFJAZZ Collective members Sean Jones (trumpet) and Robin Eubanks (trombone) all sat in, expanding the nonet to nearly the size of a standard big band. Blanchard even switched to Fender Rhodes after soloing on trumpet and joining the expanded horn section as the crowd hollered and shimmied past midnight. DB