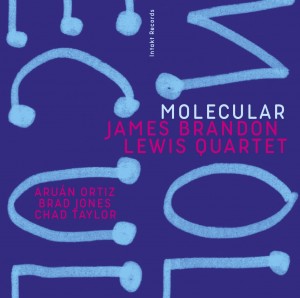 As much as any other contemporary bandleader, James Brandon Lewis devises thematic ideas for each of his albums.

The saxophonist, who’s released as much music in the past few years as others typically do in a decade, recently has gone in on the idea of rebelliousness (An UnRuly Manifesto) and a historical appreciation for the sax-drums duo setting (Live In Willisau). He now takes on science with Molecular.

There’s a knotty explanation related in the album’s liner notes about how Lewis’ research into the double helix informed his mode of composition here. But at some point, he also dismisses it, making the premise seem like just another intellectual pursuit among many.

“I came up with this information and it’s been a process,” he said. “I don’t understand all of it, even though I have a lot of sheet music that I’ve written off of these formulas.”

“Helix” finds the bandleader dispatching choked notes, maybe aurally sketching the twist and turns of the song’s titular structure; the following “Per1” stacks unusual combinations of notes to relate a similar visual idea with a considerably different feel. But the post-bop setting—however space-aged—recalls the best of quartet interplay, as pianist Aruan Ortiz and drummer Chad Taylor bounce rhythms off each other. A few more slowly paced efforts—“Breaking Code” and the title track—allow the bandleader to display a different aspect of his nature with varying results. It adds a bit of welcomed texture to an album otherwise given over to muscular yet thoughtful displays of blowing.

Whatever recording—or recordings—follow in quick succession, they’ll likely offer up a deeper look at Lewis’ expanding universe of intellectual infatuations.