In its fifth year, Wilco’s Solid Sound Festival proved to be a dense blend of eclectic music, spacious contemporary art and outdoor festival ambiance. Located at the Massachusetts Museum of Contemporary Art, better known as Mass MoCA, the festival was truly one of “music and art,” as so many multi-day musical concerts claim to be. Patrons were encouraged to experience multimedia exhibits by the likes of James Turrell, Laurie Anderson, Nick Cave and Jenny Holzer between sets from music’s most boundary-pushing artists.

The music ranged from jazz pioneers like the Nels Cline Four, Robert Glasper Experiment and Dawn of Midi to rising indie stars such as Kurt Vile, Joan Shelley and Andy Shauf. Somewhere in the middle, you’d find the Afrobeat experiments of Idris Ackamoor & The Pyramids, the long-awaited return of ’60s cult group The Shaggs, CBGB’s mainstays Television and many more. The only common thread between the musical programming seemed to be that each artist has a unique twist that made their sound all their own. Of course, at the forefront of this phenomenon is Jeff Tweedy’s Wilco, which provided two nights’ worth of incredible sets for the patrons.

It was just after sunset when Wilco took the stage the night of June 23. The six-piece experimental Americana outfit had held a poll in the months leading up to Solid Sound Festival, where fans could vote on an album that the band would play in its entirety. The fans’ selection was 1996’s Being There, Wilco’s sprawling, 19-track second LP, and one that found Tweedy’s alternative country songwriting transitioning into a more indie-minded style.

Although only two members of the band’s Being There lineup remain in Wilco, the band fell into their place in recreating the classic: Cline jammed especially hard on the “Hotel Arizona” chord progression, and in other moments, while multi-instrumentalist Pat Sansone effortlessly transitioned from keyboards to banjo to Rhodes to guitar. After the final song of the album, “Dreamer In My Dreams,” Tweedy tipped his hat and the band retreated backstage.

The fans cheered for more. What happened next was totally unprecedented.

Yankee Hotel Foxtrot, came in second place by just a few percentage points. Tweedy, always one to please his fans, decided to play that album in its entirety for the encore. After Wilco returned to the stage and played the first three songs from the 2002 release, excitement built, and once the band settled into the 1-2-3 punch of “War On War”, “Jesus, Etc.” and “Ashes Of American Flags,” fans rejoiced as they received a massive surprise on a night that was supposed to be relatively predictable.

Following the Wilco performance, Brooklyn’s Dawn of Midi got started on another stage with their poly-rhythmic composition Dysnomia. The band looks like your traditional jazz trio, but sounds more like electronic artist Aphex Twin, and that dual identity was the perfect fit for a Solid Sound late-night performance. Listeners with open ears were drawn to the stage on their way out of the festival, and by the end of the night there was a full-on dance party, in which at least two members of Wilco participated.

June 24 was by far the busiest day of the festival, featuring programming from noon until 1 a.m., including pop-up performances around the Mass MoCA museum. Those surprise slots turned out to be some of the most rewarding moments for fans who sought them out. First up was Wilco mastermind Tweedy, who performed a 20-minute improvisational set alongside Darin Gray (Jim O’Rourke, On Fillmore, Tweedy) on lap guitar and Chris Corsano (Joe McPhee, Sylvie Courvoisier) on drums. The trio produced an incredibly fierce and deep wall of sound that shook the few hundred onlookers to their bones. Anyone who stayed got a rare glimpse of a songwriting genius blowing off some steam with droney free-jazz.

Many patrons stuck around this particular spot in the museum to witness CUP, a new duo consisting of husband and wife Cline and Yuka C. Honda. The set spanned from ambient sound washes to a post-rock trip-hop sound that found Cline handling vocal duties.

Back outside the galleries, Robert Glasper Experiment got started by covering Sade’s “Cherish The Day,” featuring keytarist, saxophonist and vocalist Casey Benjamin on vocals. The group sounded great as they moved through tunes from their 2016 album ArtScience and covers of Kendrick Lamar’s “How Much A Dollar Cost?,” finishing with The Police’s “Roxanne.”

Wilco’s June 24 headlining slot had the band exploring an eclectic setlist, drawing from each of their releases with the exception of the two that they played entirely the night prior. The sextet opened with the sad and intense “At Least That’s What You Said,” wasting little time before Cline and Tweedy engaged in some fantastic guitar interplay. The band would go on to play a total of 29 songs, including the electro-rocking “Art Of Almost,” the Beatles-tinted “Candyfloss,” fan-favorite “Impossible Germany,” post-punk “Bull Black Nova” and finishing with the barn-burning “Hoodoo Voodoo.”

The final day of the festival was dedicated largely to the Wilco members’ side projects. Drummer Glenn Kotche’s On Fillmore brought material from their Brazilian-twisted new spiritual jazz album (Happiness Of Living, Northern Spy) to life with the help of some imported musicians, while keyboardist Mikael Jorgensen’s Quindar project melded analog synths with electronica production and tongue-in-cheek space visuals to form a mid-afternoon dance party. 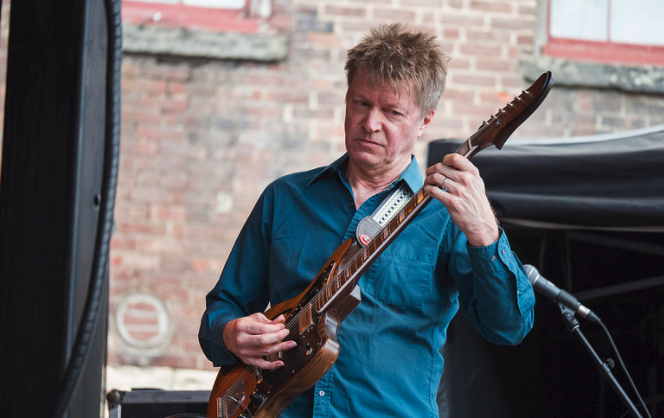 The Autumn Defense serves as John Stirratt and Sansone’s other singer-songwriter outlet, while Nels Cline Four unites Julian Lage, Scott Colley and Tom Rainey with the accomplished Wilco guitarist to breathe new life into some of his best work, including “Bright Moon” and his reworking of Carla Bley’s “Temporarily.”

The festival concluded with Tweedy, the project between Jeff and his son Spencer. They invited Lage and the entire Wilco band to sit in on “California Stars” followed by The Band’s “I Shall Be Released,” just as the sun began to set over the Berkshires. Solid Sound clearly proved that Wilco’s breadth rivals any of their jam-band contemporaries, but also that their taste is far more refined than most other bands popular enough to host a multi-day festival. DB

(To read in-depth reviews of performances by Dawn of Midi and The Shaggs, click here.)