For several decades, the idyllic small town of Ojai, California, has been the annual site of one of America’s more important festivals dedicated to contemporary classical music, an enlightened retreat hosting some of the great composers and musical figures of the 20th century and beyond. Early on, Aaron Copland and Igor Stravinsky came to Ojai, followed by John Adams, a few memorable visits from Pierre Boulez as music director, Olivier Messiaen, Gyorgy Kurtág and, just last year, the great Finnish composer Kaija Saariaho.

To that list, the annals now include jazz icon-in-the-making Vijay Iyer, who was tapped by artistic director Tom Morris to head up the 2017 edition, the 71st annual. Despite the running commentaries and dialectical debates about the constricting division of jazz vs. classical aesthetics, Iyer can be deemed as the musician who nimbly helped to make Ojai Festival safe for jazz—or idioms and subdivisions thereof—for the first time in the fest’s history.

Before the festival, I asked Iyer, whose Ojai experience was his first official festival curation project, if one of his missions in devising this program was to blur and question notions of genre. “It may look that way,” he said. “It’s not really a theme in the sense of trying to cross off a lot of items on a checklist. Everybody involved is a friend or colleague of mine, or [someone] who I have fostered a relationship with. I guess it doesn’t feel to me that I’m moving between worlds. It just feels like I’m having another party,” he laughed.

But, of course, it was a serious party, in the “serious music” sense. His musical friends and musical/philosophical allies included multi-faceted drummer-composer-experimentalist Tyshawn Sorey, trombonist-composer George Lewis, flutist-composer Nicole Mitchell and members of the bedazzling contemporary music ensemble ICE (directed by Steven Schick, a masterful percussionist himself and the inspired music director of the 2015 Ojai Festival), and a prominent focus on the still-vital, 52-year-old cultural phenom that is the AACM.

“It’s not like I’m trying to force them into relevance. If you think about artists from previous generations—I’m 45 and a lot of them are in their 70s—that was a previous generation that dealt with, I don’t want to say blurring genres: it’s more about mobility. That’s the way George would put it. Who’s out there who wasn’t afraid to write string quartets and orchestra music? Who asserted a place for that, how was it received, and why?

“The idea of me being tagged as a jazz musician who is dabbling in chamber music is basically how they were seen, too. But the reality is something very different, which is that it’s integrated. It’s one vision that manifests itself in a lot of different ways. In that way, they are not only precedents, but have been huge influences on me, individually and also as a community.”

(Interestingly, the Ojai performer list also entailed something of a “six degrees of Steve Coleman” network of connections, given a Coleman alumni list including Iyer, Sorey, saxophonist Steve Lehman and dynamic vocalist Jen Shyu, who gave a fascinating solo performance of her folkloric roots-discovery project, inspired by research in East Timor, Vietnam and elsewhere).

At the Ojai Fest, there have been occasional brushes with jazz in the past, as when Maria Schneider premiered her work “Winter Morning Walks” with soprano Dawn Upshaw here, and when jazz-informed British composer Mark-Anthony Turnage’s piece recorded with John Scofield, Blood On The Floor, was played on the Libbey Bowl stage (with Mike Miller as guitarist). Three years ago, The Bad Plus offered up its maverick version of Stravinsky’s masterpiece Rite Of Spring (something of a theme song at this festival, and heard this year in a sinewy chamber orchestra arrangement).

Yet never before was the j-word so embedded in the festival’s fiber. Iyer was ideally suited to the task, as a composer, performer and conceptualist with an unusually open-minded view of cultural border-crossing. One of the powerful surprises of the weekend was the poetic and racially-politicized, “Black Lives Matter-“ related and, yes, jazz and gospel-infused work “Yet Unheard,” by venturesome composer Courtney Bryan, and featuring striking soprano Helga Davis as a victim of police violence and abuse.

Over the weekend, we heard Iyer in multiple settings. He showed his ever-deepening attributes as a composer, most notably in the impressive world premiere of his engaging Violin Concerto, “Trouble,” for style-flexible virtuoso Jennifer Koh (whose late-night solo concert “Bach And Beyond,” melding Bach, Berio and others, was a bold highlight of the weekend). 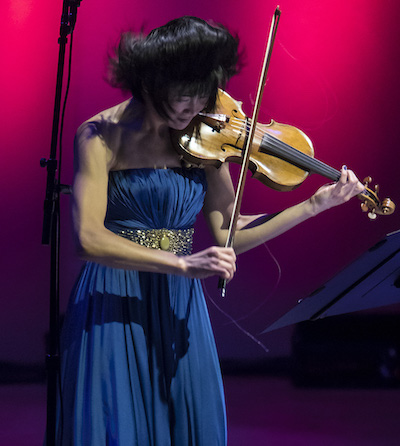 Tapping his acclaimed 2016 ECM album, A Cosmic Rhythm With Each Stroke, Iyer embarked on a spare, moving late-night duet set with veteran trumpeter Wadada Leo Smith, and ventured into some feel-good Indo-Jazz in an all-star quartet featuring saxophonist Rudresh Mahanthappa, tabla master Zakir Hussain and the profound Carnatic vocalist Aruna Sairam. He closed out the program on an indisputably jazz-related note, with a potent set by his jazz sextet (with longtime bassist Stephan Crump, scene-stealing drummer Sorey, saxophonists Lehman and Mark Shim and Graham Haynes on cornet and flugelhorn).

Caution and jazz-affiliation reticence was, at festival’s end, cast to the wind, and the ambient natural noises which are an integral part of Ojai’s outdoor festival experience (the village’s cricket choruses and bird song performers are world-renowned, appreciated by no less a lofty fan than Messiaen). 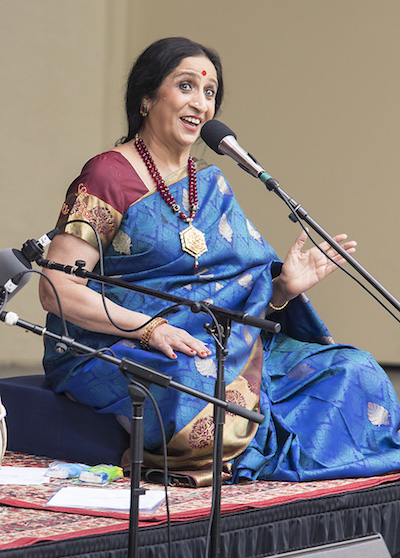 Ojai is also a famously spiritual ex-urban enclave, home to regular visits and sagely lectures and meetings with Krishnamurti and other spiritual leaders. In that context, there was an intriguing moment when AACM co-founder and veritable jazz sage Muhal Richard Abrams spoke during a panel discussion onstage.

Abrams dispensed some pithy and occasionally salty wisdom about the origins and aesthetic agenda of the AACM. Then, the stage was turned over to the West Coast premiere of Lewis’ AACM-related opera, Afterword, an often strong and certainly well-meaning but also sometimes labored piece, bogged down in revolutionary rhetoric and a stern post-serialist musical language.

Improvisation was a radical constant in the program, nowhere more persuasive than in Sorey’s stunning display of “Conduction”—the guided improvisation technique pioneered by the late Butch Morris and with a refined and personalized style by “Conduction” heir apparent Sorey (whose heightened limb and finger awareness, as a drummer, must have informed his conduction style). 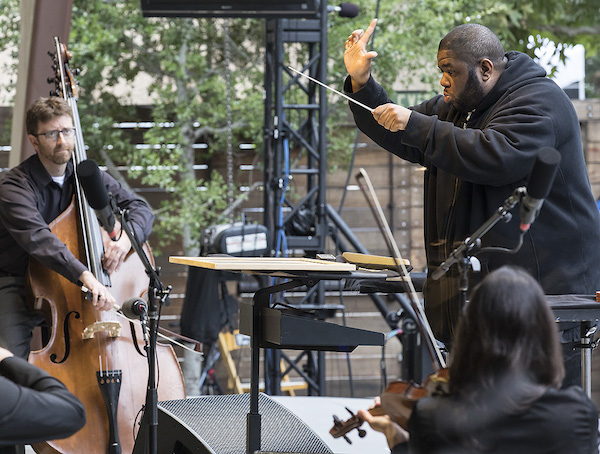 Creating the impromptu ensemble piece with members of ICE, compared to the jazz players often involved in Morris’ work, conjured up a detailed and unique ensemble sound painting, a triumphant hour in the park this year.

Music involving structure and freedom, music on paper and in the moment, was also a prominent theme in the work of Anthony Braxton, whose entrancing “Ghost Trance Music” piece found ICE musicians moving on and off the stage of the Libbey Park Gazebo, and in and out of fixed and free play commands.

“The Inner Spectrum Of Variables,” for Sorey’s Double Trio (mixing classical string trio and jazz-wise piano trio instrumentations), also willfully mixed up score-meets-improv ideas, as did music in the ruggedly fine and delightful early morning concert featuring Nicole Mitchell’s work. Opening with solo flute, she sat down in the allotted composer’s seat for the world premiere of the chamber work “They Witnessed An Unfolding” and joined the ranks, in a circle, for the first performance of “Inescapable Spiral,” similarly blessed with the power of thoughtfully deployed improvisation amidst structural pillars.

For the 2017 edition of the Ojai Festival, Iyer succeeded in shaking up norms, irking some status quo factions in the crowd, and—most importantly—also confirming core progressive musical values in Ojai. DB