Gypsy jazz guitarist Stephane Wrembel, a native of Fontainbleau, France, and current resident of Maplewood, New Jersey, has been waving the flag for Django Reinhardt ever since he attended his first Django Reinhardt Festival in Samois-sur-Seine as an aspiring player. He created Django A Gogo, a celebration of the Gypsy jazz genius, back in 2004. Now in its 13th year, the celebration, which as grown to six days, included master classes and performances in Maplewood, and culminated in a gala concert at Carnegie Hall on March 3.

Wrembel came out first with his working quartet consisting of rhythm guitarist Jensen, bassist Ari Folman-Cohen and drummer Nick Anderson. His lightning runs, dazzling filigrees and wild glissandi up the neck of his acoustic steel-string manouche–style Gitane guitar were directly in the spirit of Reinhardt on his driving, Django-inspired original, “Prometheus.”

Deep-voiced singer Gastine joined the group on a romantic musette popularized by the gallant French crooner Jean Sablon, who reputedly had introduced Django to the music of Louis Armstrong in the early 1930s. The group then charmed the packed Carnegie Hall audience with Wrembel’s beguiling minor-key waltz “Bistro Fada,” which effectively combined a romantic vibe with a blazing single note solo from the Django disciple.

Part of Wrembel’s intention for this Django A Gogo concert was to “bring together people that are from the Django world and people who are not of that world, but [who] have the touch to go into that world.” And with that, he brought out Virginia flatpicker Keel, who provided a link between Django Reinhardt and Doc Watson in his own dazzling Americana approach to gypsy jazz. Gastine next announced, in his thick French accent, that “It has been my dream to sing this song in Carnegie Hall.” And with that preamble, he launched into John Denver’s “Take Me Home, Country Roads,” which turned into a sing-along with the audience. 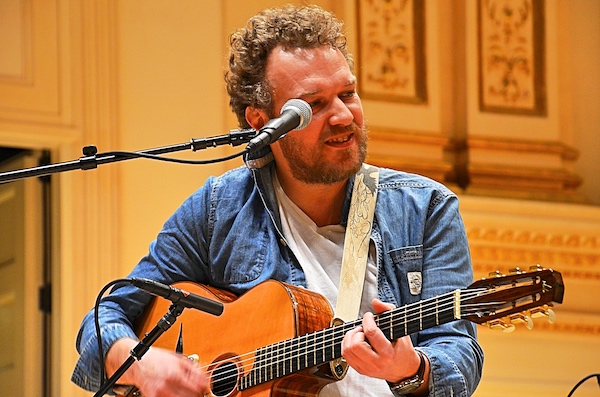 With guest Nick Driscoll on soprano sax, the ensemble put an Eastern spin, courtesy of a tamboura drone, on a unique interpretation of Reinhardt’s haunting “Troublant Bolero.” Gypsy guitar great Rosenberg, who provides the off-screen guitar parts on a new Django bio-pic that just premiered at the Berlin Jazz Festival, told the audience that his last appearance at Carnegie Hall was in 1993, when he performed there with violinist Stéphane Grappelli, Reinhardt’s partner in the Swing era Hot Club of France quintet. His commanding style and flawless chops were prominent on his gentle “For Sephora,” written 29 years ago for his little sister, and a jauntily swinging rendition of “Djangology.”

Al Di Meola entered to wild applause and announced to the crowd that his last Carnegie Hall appearance was 42 years ago, when he made his debut appearance with Return To Forever at age 19. He then explained, “Django’s music is a whole different world that I’ve always admired from afar,” adding, “I’m going to venture into it, if they’ll let me.” 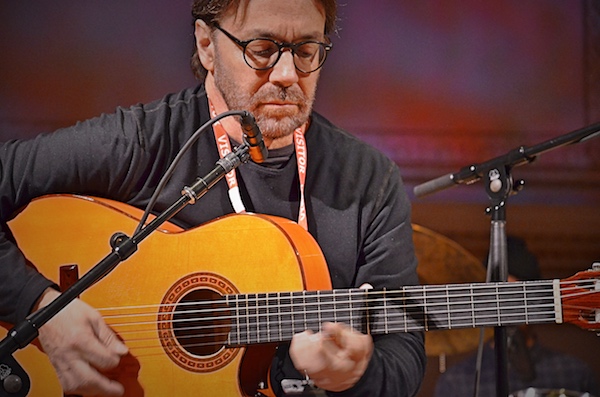 Following an extended solo piece on nylon string acoustic guitar, he joined the group on Django’s dreamy musette waltz, “Indifference,” which also showcased his patented speed licks on a blazing solo. The first set ended on an exhilarating note with Django’s “Double Jeu,” which had Di Meola injecting some flamenco flair into the proceedings.

Wrembel, Rosenberg and Di Meola opened set two with a romp through Di Meola’s “Mediterranean Sundance,” a featured number from the 1981 album Friday Night In San Francisco, Di Meola’s first of many encounters with Paco De Lucia and John McLaughlin as The Trio. Sparks flew on this speed-picking showcase. Keel joined the three featured guitarists and rhythm section on a rendition of Chick Corea’s “Spain” and a dreamy interpretation of Reinhardt’s best known composition, “Nuages.” 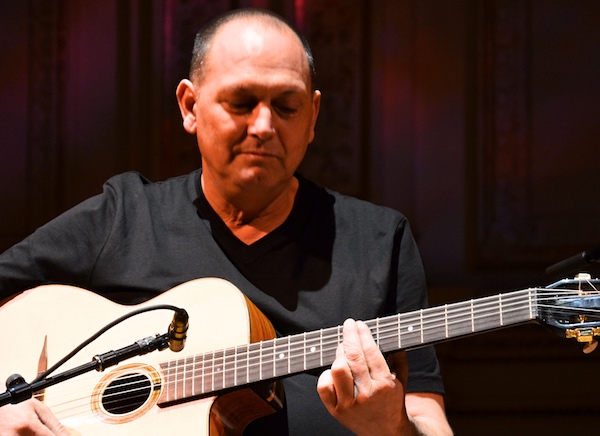 Vocalist Ryan Montbleau then led the ensemble on a mellow rendition of Hoagy Carmichael’s 1930 Swing era staple “Georgia” and Duke Ellington’s 1931 anthem “It Don’t Mean A Thing If It Ain’t Got That Swing,” which also served as a stunning showcase for Rosenberg’s considerable solo prowess.

The evening concluded in rousing fashion with nine guitarists on stage — including surprise appearances by the Dutch guitar great Paulus Schäfer and Wremble’s 18-year-old student Sara L’Abriola — burning on Reinhardt’s classic “Minor Swing.” Djangophiles in the house went home humming that tune with smiles on their faces. DB