In the tropical garden otherwise known as the University of Miami, a handful of jazz stars from the Dizzy Gillespie constellation gathered on Jan. 26 to pay homage to the centennial of the iconic trumpeter’s birth. Festival Miami, a jazz highlight of the month-long annual winter concert series at UM, was organized by drummer Ignacio Berroa, and featured Gillespie associates Jon Faddis on trumpet, Gonzalo Rubalcaba on piano and the great Jimmy Heath on tenor saxophone, in combos and with the Frost School of Music’s fantastic concert big band.

The week before, the immensely talented Tiempo Libre served as a perfect lead-in to the Dizzy celebration. Consisting of Havana conservatory-trained musicians who craved jazz (frowned upon by Fidel Castro) as much as son and timba, the members had also followed the steps of most of the Irakere band in defecting to the United States.

In front of a mostly Cuban-American audience, the multiple Grammy-nominated five-piece played a blend of classical works and clave, from their Bach In Havana and Panamericano albums. Pianist bandleader Jorge Gomez is a bit of an ambassador for the variety of forms of Cuban music, and surprisingly called for three cha cha chas (through a contemporary filter), with love and no irony for what some consider an old-fashioned form.

He also illustrated the Buena Vista Social Club’s “El Cuarto De Tula,” first as a traditional son, and then in their own unique way, with all of those hundreds of years of music history behind it—“faster, aggressive and more jazz,” as Gomez explained. Tiempo Libre is famous for getting the audience dancing in staid concert halls around the world, and that night the singer Xavier Mili led the many dancers through a long, looping conga line.

Gillespie’s early love of Cuban rhythms and musicians is well known, and he is of course credited for marrying Chano Pozo’s Afro-Cuban rhythms with modern American jazz.

And, so, fitting for a Dizzy tribute, Rubalcaba opened the show at the 600-seat Maurice Gusman Concert Hall with his solo version of Gillespie’s masterpiece mix of jazz and Latin rhythms, “Con Alma,” proceeding with both great delicacy and percussive strength. Like Paquito D’Rivera and Arturo Sandoval, Rubalcaba had been encouraged by Gillespie to leave Cuba, and continued their musical relationship afterward. 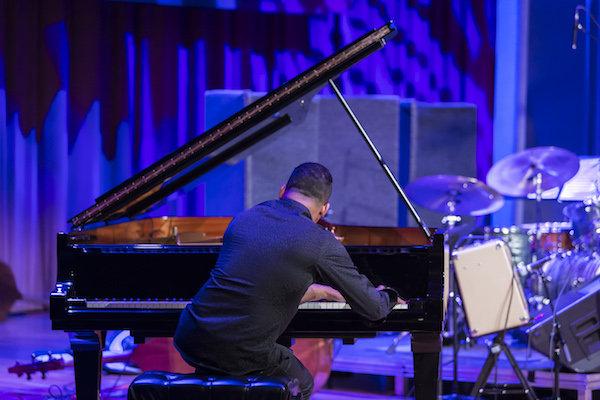 The rhythm section arrived—Berroa on drums, Martin Bejerano on piano, and Chuck Bergeron on bas—and welcomed Heath, the legend of bebop and big band. At 90, the diminutive Heath was as gracious and charming as he was lithe and sly with his tenor solos. On “Groovin’ High,” Heath launched the first solo, Faddis next, and the night’s party was officially underway.

For the rest of the evening, Faddis and Heath took much of the lead work, and offered a bit of a comedy routine between songs. Before “Hot House,” Heath told the audience he was “probably the oldest Dizzy alumni still on the planet,” having first joined Dizzy’s band in 1949. Faddis asked him to share his often-repeated story about how Heath and Coltrane were crushed to watch the more handsome Paul Gonsalves get all the girls while in Dizzy’s orchestra. 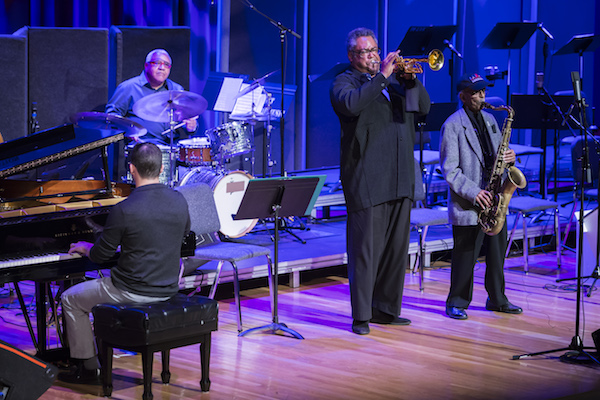 When the full 19-piece band took the stage, with the bass and piano seats changed, and guitar added, an immensely pleased Heath got to hear such a capable big band ensemble march through his own charts for “Fiesta Mojo.”

Although trumpeter John Daversa is the University of Miami’s jazz band director and a fine player himself, Faddis did nearly all of the conducting work of the big band. He also played the part of Dizzy’s famous clowning onstage, with his towering height and one-off jokes.

In interviews before the concert, each man who had worked with Gillespie mentioned Dizzy’s love for educating. While in the Monterrey high school band, Daversa first met Gillespie when he was a visiting artist. “We got to hang out with Dizzy while he smoked his cigars! He was giving, but also tough love in the rehearsals.” 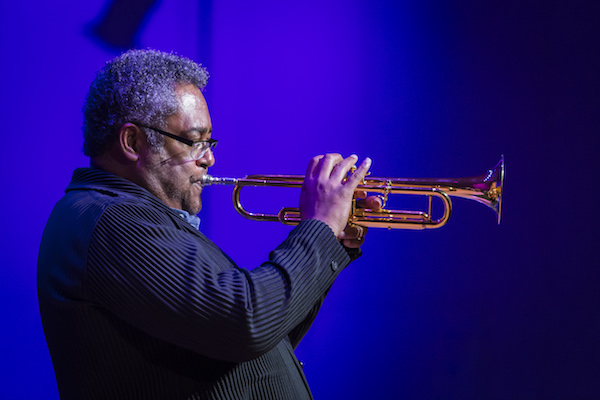 Faddis, himself long associated with university teaching, took on the role of educating band members who nervously endured his teasing and prodding, but paid him back in impressive swing and a masterful following of the classic Dizzy charts. An after-hours jam would have let the junior band members show the old bulls what they really had, but a cutting session would have to wait for another time.

For the entire night, Faddis’ muscular upper register work and Heath’s searching, fluid sound were framed by Berroa’s hard and swinging attack, from “Emanon” and “Things To Come” to “Night In Tunisia” and “Manteca.” What a pity that the entire band can’t tour this year to celebrate both Dizzy’s most famous works and the vital, living legacy his continuing influence. DB