As he demonstrated time and again on the bandstand of the Kuumbwa Jazz Center in Santa Cruz, California, on April 6, Dave Holland is a versatile instrumentalist and collegial bandmate.

Fresh off being named an NEA Jazz Master on April 2 in Washington, D.C., the bassist did a three-city West Coast run that included stops in Davis, California, the night before and in Portland, Oregon, the following day.

Curiously, the Kuumbwa concert was billed as the “Dave Holland Trio with Kevin Eubanks and Eric Harland with special guest Chris Potter,” but it was most definitely a quartet date—with trio, duo and solo performances spread throughout both the early and late show.

Holland has also done concerts unaccompanied, recorded and gigged duo with pianist Kenny Barron and led a trio with Eubanks and drummer Obed Calvaire. And, as KJC Artistic Director/Co-Founder Tim Jackson mentioned between sets, the bassist also participated in The Monterey Quartet with Harland, Potter and pianist Gonzalo Rubalcaba for the 2007 Monterey Jazz Festival (for which Jackson is also the Artistic Director).

This specific gathering of musicians at Kuumbwa offered a special multi-generational assemblage: Eubanks first played with Holland in the late ’80s, Potter a decade later and Harland about seven years after that. 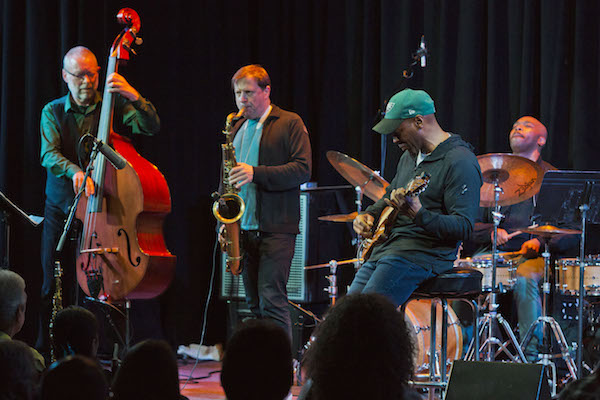 In introducing the band, Holland explained that they’d be performing pieces written by all four members and from his different projects. He promised free-flowing musical dialogues, and indeed each half of the night came across as either extended suites with seamless segues instead or roughly 75-minute symphonies with no breaks between the multiple movements.

From early on, it was a joy to hear and see Holland and Harland’s hearty interplay. The former boasts a deep tone that resonates in listeners’ chests and a still-stunning nimbleness. Harland’s alternately playful and fierce playing served as the perfect complement—and sometimes foil.

Similarly, Potter’s tenor and soprano saxophone and Eubanks’ electric guitar aesthetic are well matched. When Potter launched into an extended bluesy solo on tenor, Eubanks laid down taut, crunchy chords that transformed the beachfront city of Santa Cruz to a mythical locale in the deep South.

Eubanks sat out for the first trio number of the night. Potter’s angular tenor lines were a perfect fit for the lean chordless format.

When it came time for the first guitar trio segment, Harland pared down his instrument selection to tambourine, stringed bells and kick drum. Eubanks’ occasional string popping and Holland’s thick, sustained notes combined with the drummer’s minimalist set up for a haunted swamp blues sound.

Potter and Eubanks started one number alone together with the guitarist switching from an organ-like tone to manipulating effects to create ghostly atmospherics while Potter prodded and poked on tenor.

In introducing the late show, at around 9 p.m., Holland recalled his first time playing the 42-year-old non-profit venue—in either 1978 or 1979 as part of a duo with the late saxophonist Sam Rivers. He said he remembered the gig clearly and that playing with Rivers was “always an adventure.”

Holland then began unaccompanied, probing a theme before delving into a friendly call-and-response with Harland.

While the quartet navigated odd time signatures with ease, it was also just as comfortable generating danceable grooves. There were extended moments of both abstract and hard funk as well as jam-band-type passages that were so locked in that a pair of audience members were bobbing left to right and comically head banging.

There was a power trio piece during which Eubanks got to display his lead playing and Potter at times deftly doubled his lines on tenor.

Even ’70s-era dance music was explored, with Eubanks employing crisp and minimal rhythm guitar over Harland’s precise hi-hat eighth notes and Holland’s crisp bass line. The outlier was Potter, whose wild explorations were a reminder of the more acidic aspects of the era.

Potter switched to his sweet soprano and Harland got his second showcase of the night as everything came to a close with Holland and Eubanks providing simpatico support.

With its absence of song titles, stage banter or even pauses, the lack of extra-musical content gave the presentation an extremely cohesive vibe. DB