Eat your Wheaties if you’re attending Rotterdam’s inJazz Conference and Festival. While it’s only two days, this industry-heavy event compresses a lot of energy. From edifying panels and one-on-one networking sessions to rousing performances from some of the brightest burgeoning talent the Netherlands can offer, the inJazz Conference and Festival exemplifies the country’s bountiful jazz scene.

Indeed, navigating the Netherlands’ enthusiastic jazz eco-system at this year’s edition (June 22–23) required stamina and graceful diplomacy, because the inJazz Conference encouraged attendees to engage with unfamiliar people and listen to unfamiliar music.

While the vibe was unquestionably congenial, it was still designed to get you out of your comfort zone. “The Netherlands is a small market, and international contacts matter a lot to artists, record labels, venues, festivals and booking agencies,” argued Mark van Schaick, the conference’s programmer. “The scene needs to create new opportunities and this can happen by meeting new people, instead of those you already know. It’s one of the reasons why we put a lot of effort in having the professionals at the event that really matter. In short: we want to connect, to inform and to inspire.”

“[The] inJazz [conference] is a window to the Dutch Jazz scene and beyond,” added Götz Bühler, a journalist for the German jazz magazine Jazz Thing, who also moderated a panel on Germany’s jazz scene. “As many journalists and label representatives from Europe and the U.S. attend, [the conference] is a wonderfully efficient yet relaxed meeting ground to nourish existing relationships and make new ones.”

This year’s conference hosted 20 workshops and panel discussions that ranged from live-streaming clubs and festivals to jazz in cinema to tips on delving into the shaky international jazz scene and jazz’s interaction with social justice (full disclosure: I participated as a panelist for the latter).

The festival boasted 29 rotating performances at the LantarenVenster, a posh music, cinema and dance theater inside Rotterdam’s 43-story New Orleans skyscraper in the high-rise Wilhelminapier area; and at the Kantine Walhalla, a rustic performance space and factory across from the pier.

Given the Netherlands’ multicultural characteristic, the Dutch music showcases were stylistically varied. Some of the highlights included pianist Xavi Torres, who led his trio through a splendid modern post-bop set that placed equal emphasis on the leader’s crystalline touch at the piano and labyrinthine improvisations, which at multiple times hinted at Brad Mehldau and Geri Allen, and his sparkling interaction with drummer Joan Terol and bassist Vic Moliner.

Folkert Oosterbeek revved up the dazzling Dutch soul-jazz quartet BRUTT! via smoldering Hammond B-3 organ swells and bluesy comping as the rhythm section of drummer Felix Schlarmann and bassist Thomas Rolff propelled saxophonist Maarten Hogenhuis’ strutting riffs and melodies that recalled the best of the vintage Blue Note and Prestige records, while Congolese-born guitarist and singer Luwela Kasulwe entranced the audience with his gentle melodies, circular guitar patterns and haunting vocals as he fronted his empathic quartet. The Netherlands’ exuberant Broken Brass Ensemble brought down the house with a sweaty mix of second-line Cresent City groove, Washington, D.C. go-go rhythms and jaunty ska.

Tin Men and the Telephone, however, brought the most ingenious performance from the Dutch contingency. Led by pianist and conceptualist Tony Roe, the trio incorporates many of the strategies that Jason Moran’s Bandwagon applied when using pre-recorded sound material, matching tonalities and rhythmic speech patterns then building bewitching improvisations upon them.

Tin Men and the Telephone took that lofty concept to greater, more political heights. Focusing on music from their new disc, World Domination, Part 1, Tin Men and the Telephone encouraged attendees to download a smartphone app with which they could guide some of the set list, which included provocative agit-pop swipes at controversial political figures like U.S. President Donald Trump, Turkish President Recep Tayyip Erdoğan, France’s Marine Le Pen and North Korea’s Chairman of the Worker’s Party, Kim Jong-un. The band conceived an elaborate sci-fi game in which space invaders asked earthlings to vote—via smartphones—on which redundant populist leader should be eradicated to restore “intergalactic equilibrium.”

Even if you weren’t politically savvy, their concerts still had much fun to offer as the app also encouraged the crowd to craft their own rhythms, harmonies and melodies, the best of which Tin Men and the Telephone uploaded the on a screen into riveting modern jazz excursions, enlivened by Roe’s percussive yet slyly lyrical pianism, Bobby Petrov’s snapping drum rhythms and Pat Cleaver’s stout bass lines. 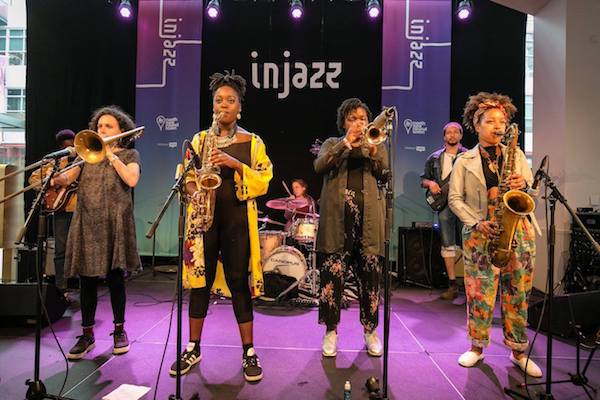 Toward the end of the two-day event came the announcement of the Buma Boy Edgar Prize—which originated in 1963 as the Wessel Ilcken Prize—the most prestigious award for jazz and improvised music in the Netherlands. This year’s recipient was pianist and composer Martin Fondse, who received 12,500 euros and an upcoming “self-compiled” concert at Amsterdam’s famed Bimhuis concert hall. DB