JLCO’s Henriquez Honors “Latin Side of Dizzy” in Centennial Tribute

Aside from his role as one of the primary architects of bebop, John Birks “Dizzy” Gillespie was one of jazz’s most important musical diplomats, an outsized and affable personality who, in the middle years of the 20th century, helped narrow the cultural distance between American jazz and the music of the Caribbean, particularly the traditional folk music of the African diaspora in Cuba.

Working with such Cuban visionaries as Chano Pozo and Machito in the nascent years of bebop, Gillespie helped usher in and define the sub-strain of modern jazz now known as Afro-Cuban, and in the process, would pave the way for further hybridization of jazz and Latin music.

That legacy was honored on Jan. 27 at New York’s Jazz at Lincoln Center by Carlos Henriquez, the bassist of the Jazz at Lincoln Center Orchestra, who helmed an octet with hand-selected guests in a program titled “The Latin Side of Dizzy.” The concert, held in the venue’s Appel Room, was part of Lincoln Center’s two-night “Celebrating Dizzy Gillespie” festival, which paid homage to the iconic trumpeter in his centennial year (Gillespie would have turned 100 on Oct. 21). Other tribute shows included a career retrospective by JLCO trombonist Vincent Gardner and a small-ensemble jam with trumpeters Bruce Harris and Theo Croker.

“Dizzy is one of the reasons I decided to play this music,” Henriquez told the crowd early in his set, “not just Latin music, but American jazz.” As the bassist of one of the most respected orchestras in mainstream jazz, the Bronx-born Henriquez—who released an album, The Bronx Pyramid, on Lincoln Center’s Blue Engine Records in 2015—has indeed carried the mantle of Gillespie’s musical outreach into the 21st-century. His collaborators for this special project—trumpeter Michael Rodriguez and his piano-playing brother, Robert; trumpeter Terell Stafford; trombonist Marshall Gilkes; saxophonist Melissa Aldana; drummer Obed Calvaire; and percussionist Pedrito Martinez—are all similarly well-versed in the complex patois of Latin jazz.

From the opening number, a lean workout of Gillespie and Pozo’s “Manteca,” it became clear that, under Henriquez’s clean yet dynamic arrangements, the octet would function as an agile unit, with instruments taking on diverse and multiple roles. There was a smooth yet biting precision to this tune, which, in effect, seemed to summarize the mood of the evening: These were Dizzy orchestrations through a distinctly modern lens, with both the Latin elements and modern jazz harmonies underscored in broad strokes.

Rodriguez, for example, laced his piano solo with spiky modern accents, side-slipping in and out of the changes, while Aldana, who typically plows headlong into advanced harmonic reaches, chose to draw some danceable Afro-Latin funk motifs from her arsenal. Calvaire and Martinez, for their part, formed a cohesive battery that exploded between Latin rhythms and swing feel with equal measures of accuracy and energy.

Henriquez was also careful to highlight the African currents of Afro-Cuban music, most notably with the inclusion of Gillespie’s lesser-known composition “Kush.” The song, which builds around a warped and roiling 4/4 groove, featured a lithe trombone solo by Gilkes, who overlaid a liquid, joined-up cursive to the song’s formidable underlying structure. (A longtime member of the WDR Big Band, Gilkes is a well-regarded interpreter of Latin music, and impressed this night with his occasional vocal contributions—in Spanish.)

Henriquez seemed to blossom in his role as a small-ensemble leader, revealing elements of his style rarely seen with the JLCO, an outfit with which he predominantly plays acoustic bass. The intimate setting allowed for more instrumental level, and this was nowhere more evident than on the group’s rendition of “Groovin’ High,” Gillespie’s the seminal bebop number from 1945. 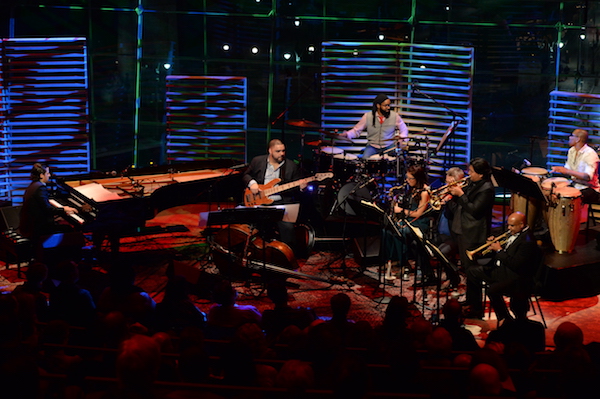 For Henriquez, the song served as a bridge into modern Latin jazz styles, and the leader switched to his five-string electric bass to strengthen that connection. After playing the knotty melody as a duet with Mike Rodriguez on muted trumpet, he proved himself a nimble soloist and meticulous timekeeper in waters far funkier than those in which he typically wades.

There was, as a whole, a pleasant sense of surprise to this concert, and one of its great joys was hearing soloists like Aldana, Stafford, Gilkes and the Rodriguez brothers—all of whom share an affinity for complex yet lyrical self-expression—dig for creative gems on simple two-chord vamps like those established on “Jambo Caribe” (a Kenny Barron song based on Gillespie’s “Trinidad, Goodbye”) and “Tin Tin Deo.”

Another pleasant surprise was the appearance of pianist Larry Willis, who joined Henriquez and the group on two numbers halfway through the set. Having honed his chops under the tutelage of Gillespie (as well as other trumpet greats like Woody Shaw and Lee Morgan), Willis brought to the conversation a sturdy bulwark of an accompaniment, especially on “Guarachi Guaro,” on which his heavy-booted block chords provided heft to an otherwise breezy groove.

In contrast, the follow-up “I Waited For You,” an intricate Gillespie ballad, was performed as a trio, with Willis, Henriquez and Calvaire relaxing into a windswept and melancholy feel, poignant and thoroughly introspective.

Henriquez added more personal flair to a pair of songs toward the concert’s end: Dizzy’s landmark “A Night In Tunisa” and “Con Alma,” which was reinterpreted here as a Cuban danson. For these tunes, Henriquez again switched instruments, putting down his acoustic bass in favor of the diminutive Ampec Baby Bass. “If you’ve ever heard a Latin band in the ’90s, this is the bass you were hearing,” he said. The octet propelled through these tunes with sure-footed poise, Henriquez adding heaps of deeply felt groove courtesy of his punchy bass tone.

In the end, it was Henriquez’s fidelity to authenticity that may have been the concert’s truest homage to Dizzy, who, in his dauntless pursuit of the Afro-Cuban sound, maintained a similar dedication to getting the just sound right. DB