Preston Jackson and Greg Ward: The Sculpting of a Protégé

Most jazz up-and-comers have musical mentors, but not so many of those elders serve as life coaches, too. When straight-A high school student Greg Ward’s grades started slipping, his mother took him to artist/musician Preston Jackson to “teach him about girls.”

“He had issues with the ladies,” recalled Jackson. “They were taking advantage of him.”

Though Ward’s father, a minister and professional church musician, was certainly an influence on his development, as a man of the cloth, such secular matters may have been deemed beyond his father’s purview. But Jackson proved much more than counsellor on affairs of the heart.

The two originally encountered each other in a band at Unitarian Church in Peoria, Illinois. “Preston and I first met when I was 14. I was performing at a church jazz event,” recalled Ward. “I was told that Preston Jackson would sit in with us. At that point, all I knew about Preston was that he was a great guitarist. After we played one song, ‘Groovin’ High,’ he says to me, ‘Damn, boy, you been studying with Jesus!’”

From then on Jackson had Ward guest with his trio in Peoria, notably during a regular Friday night session at the town’s Contemporary Art Center (which Jackson co-founded in 1989). “We’d play these tunes like ‘I’ll Remember April’ and Greg would tear it up. Like Dexter Gordon, he was very into the structure of bebop, outplaying us old motherfuckers, and then some.”

But Greg remembers Jackson, an ear-player who suffered the indignities of dyslexia at school, as more than just a bop merchant.

“As our friendship developed, I started to notice how much of an important figure he was in the art world. He began explaining his visual art ideas in musical terms to me. No one had ever done this to me before and it really changed the way I thought about improvisation and music in general as a young man.”

Jackson’s old school, off-the-top, listening-reliant approach taught Ward how to play less prescriptively, more freely. “He just demanded that I play with him in the moment one day at a show,” remembers Ward. “I was used to improvising over simple chord structures at that time, but hadn’t improvised an entire song or set before working with Preston.”

Jackson is bashful about his role as unofficial teacher, quick to name such figures as indefatigable educator Mary Jo Papich as more crucial to Ward’s career prospects. “What he learned from me,” he reflects, “was the raw shit, how to get in there and defend your own turf: the 12-bar blues dynamic, eight bar phrasing, rhythm changes—old-ass jazz. Also, I’d share some hippy talk, some of which survives from the ’60s and some of which is still real: how to behave, respect and honor those who have gone before.”

Many of his more personal characterizations resonated with Ward as culturally significant alter egos, ripe with symbolism. A large-scale metal work of a female sperm whale has become a high-profile piece of public art in Chicago, representing for Jackson issues of slavery (blacks were some of the first whalers), nature under threat and staking one’s stance against assailants (the sperm whale has teeth and is apt to defend itself).

Jackson encapsulates the Dionysian and the Apollonian. A devotee of tai chi and a spiritual person who emphasizes the importance of kindness and love for art, he’d also experienced the seamier side of the music business in his youth. His group The Rhythm Aces recorded at Memphis’ Sun studios and cut sides for Veejay and other labels. They connected with such icons as Dionne Warwick and Dee Dee Bridgewater, and Jackson befriended George Benson and Jack McDuff on the Chitlin’ Circuit.

Another association was with Jerry “Iceman” Butler, who had a 1968 hit with “Only The Strong Survive.” According to Jackson, survival was something of an issue playing at certain clubs opposite the hardcore blues musicians of the day. “The blues was scary stuff back then, if you played the blues your wife would leave you, your dog would bite you and you’d end up in jail. Us jazz guys were hoping it would die out, but then these white cats from the U.K., the Rolling Stones, came over and single-handedly rescued it from extinction,” he recalls. “Some joints wouldn’t let you play blues after midnight because when the gutbucket guys came by they’d be like Pavlov’s Dog—they’d automatically start fighting. These blues musicians, some of them fresh from the pen, would roll up in cars smelling of [sex]; there’d be some incident and someone would likely get shot.”

The wealth of the 70-year-old Jackson’s life experience—he’s also been a collector of vintage European sports cars—and his fertile mind and courageous creativity proved inspiring on many levels for Ward and hipped him to musical parallels for experimentation in the work of Franz Kline, Henry Moore and Jackson Pollock. “Surprisingly enough he understood the connections there,” states Jackson, adding during their interdisciplinary discussions, “He’d never be talking when you were talking, he always listened.”

The latter remark is paradoxical in that, like Jackson, Ward is a torrential talent with a lot to say. Such was evidenced at The Whistler, an intimate cocktail bar in Chicago’s Logan Square on April 23, when Ward assembled a crack septet—including himself on alto saxophone, Matt Ulery on bass, Quinlan Kirchner on drums, Geof Bradfield on tenor saxophone, Matt Gold on guitar, Rob Clearfield on keyboards and James Davis on trumpet—to perform music written in honor of Jackson. 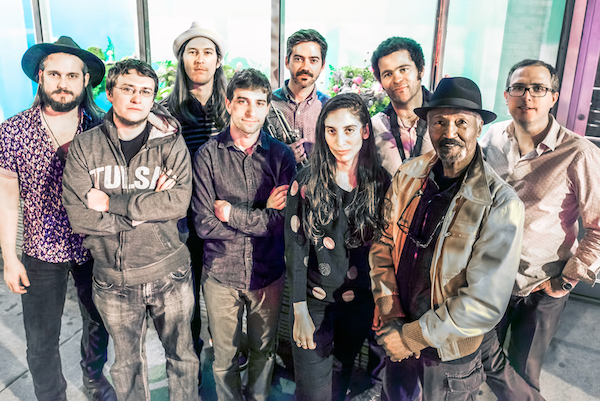 The evening began with a succinct documentary about Jackson’s work and how it has impacted Ward, directed and produced by Ward’s wife Diana Quinones Rivera. Rivera derived the title, Capturing Sunlight, from a quote in the film where Jackson describes new paintings created by the sun coming through the windows of his childhood home each day. (https://vimeo.com/98688311)

This was only the second airing of Ward’s long-form compositions for this commission, which was funded via the Jerome Foundation at the behest of New York’s Jazz Gallery.
Each of the six pieces—followed by a Hermeto Pascoal composition from Miles Davis’ Live-Evil and “Love Me,” a dedication to Jean Michel Basquiat—represented a musical reflection on one of Ward’s favorite Jackson artworks or philosophical notions.

The serpentine, supercharged two-part composition “Knocking On Freedom’s Door” was inspired by Jackson’s intense 2008 wall memorial for an Underground Railroad site in Peoria. Through-composed materials permitted space for solos from Bradfield, Gold and Clearfield, who later interpolated gamelan-like keyboard lines as Davis played melodies echoed by the saxes.The agitated tempo, suggestive of the fleeing slaves, was reined back to martial beats from the fiery Kirchner, indicative of pursuing authorities. Part two of the set-long piece culminated in a rousing herald, reflecting freedom against the odds.

“The Killing Floor” evoked scenes from Jackson’s painting Strike Breaker 1904 which commemorates the moment people of color were reluctantly offered lowly jobs in the Chicago stockyards due to strike action.

Ward also drew inspiration for his scores from Jackson’s sense of wonder at the world, and also the sense of loneliness that shadows the independent thinker (thus the songs “Who Am I?” and “Remember These Times”). “Preston would always remind me of the importance of remembering certain moments in life,” states Ward, who, despite his own freight-train creativity, maintains, like Jackson, a centered, balanced persona, reserving fevered passion for his playing.

Witnessing Ward at work with the saxophone is captivating, he generates a sweat, alternately shoring back on his virtuosity and then letting it fly. His in-the-zone concentration creates an aura on the bandstand raising the level of commitment from all who participate alongside him.

“Greg Ward has been one of my favorite saxophonists for years,” enthuses Bradfield. “He has an instantly recognizable voice on the alto—rhapsodic and lyrical, intricate rhythmically and harmonically yet direct and immediate emotionally. He’s a powerful storyteller and his technique (which is pretty formidable) always serves the music, never the other way around.”

“The same is true of Greg the composer,” Bradfield continues. “His pieces are technically demanding in many respects, and can look challenging on paper—and certainly require a bit of homework on the musicians’ parts—but even after the first rehearsal [for Capturing Light] everything seemed musically inevitable in the best sense. The beauty and logic of his writing have a lot to do with this, as does his careful selection of the musicians and his focus. He knows exactly what he wants from the music and musicians and knows how to get it to happen.”

Leading by example, Ward took a bluesy but free-form prelude to “Decatur Red” at the Whistler, a piece meditating on one of the occasional counterparts Jackson invents for himself in his work. When the band joined in the notated music didn’t stifle; Ward’s charts can contain voluble passages but rarely seem ponderous or overwritten. He constructs tempo breaks and open passages, sporadically stemming yet not choking the flow. The New York City premiere of this music in 2014 featured lyric content from vocalist Brianna Thomas, who also recited some of Jackson’s poetry. Ward re-cast the vocal parts for Davis’ trumpet for the Chicago premier.

With Preston proudly in attendance, this was quite a show to assemble in such a small venue, free of charge. “Oh man, I dropped everything to hear him play and see Diana’s film,” commented Jackson, who is constantly working on diverse commissioned projects, “that was the best thing to combine the film and the musical interpretations about my corrupt ass. I just put myself outside the work, and enjoyed the moods that these amazing musicians created.” DB