Q&A with Nico Segal & Julian Reid of the JuJu Exchange

Producer Nico Segal is best known as the architect behind 2015’s pop masterpiece Surf, by The Social Experiment, a genre-smashing hip-hop collective that brought together titans of the scene like Chance the Rapper, Big Sean, Kyle, B.o.B and Busta Rhymes. He’s also a trumpet player with a long jazz pedigree, and his latest project, Exchange, finds him swerving back into a jazz lane. Recorded with his newly formed JuJu Exchange ensemble—featuring Segal’s longtime friends Julian Reid on piano, Lane Beckstrom on bass and Everett Reid on drums—the album melds boom-bap drum tracks and silky-smooth horn solos with seamless precision.

In a recent phone interview, DownBeat chatted with Segal and Julian Reid about the making of the album, which is available in digital and vinyl formats. Segal, who is based in L.A., and Reid, who lives in Atlanta, also discussed the various influences that went into crafting the group’s unique sound. Below are edited excerpts.

What vibe were you going for when you decided to create the JuJu Exchange?

Nico Segal: Well, I think some of the pillars that made up the idea behind the album were, number one, instrumental music. Going into the project I knew I wanted to create something that was completely different from anything I’d ever done. I didn’t want all of our music to turn into beats for rappers to rap over or singers to write songs to. I wanted to highlight instrumental music and the identity behind the people playing these instruments.

And I think number two was improvisational music. I wanted music that had soloing, but not just your regular jazz standard version of soloing. I wanted soloing that was maybe all over the place, or maybe the whole form of the song is improvised, or maybe the conception of the entire song came from an improvised section of music. So I wanted to highlight the exchange, if you will, between instrumentalists, between soloists, between the different connections of the band. And I wanted to create a music that was inspired by the conversational element of jazz and improvisation and instrumental side of jazz, but wasn’t so tied into one form of jazz or one style of jazz, as jazz music is pretty much the most all-encompassing style ever.

Julian Reid: I was so excited that we got to do this album together, partly because I knew it would be geared toward people who might not normally listen to jazz. One thing I experience playing a lot on sessions in New York or Chicago, or even down here in Atlanta, is musicians primarily playing for each other, and not necessarily keeping in mind the audience. I was playing a gig last week where a guy came up to me after the show and was like, “What were the names of those tunes?” And it only hit me then that we played a killer three-hour set and didn’t announce one song to the audience! This kind of thing happens a lot, and I think it perfectly encapsulates this thing—of which I’m guilty myself—where musicians primarily play for each other and only secondarily thinking about how the audience receives it, how they about themselves as a result of this music.

I bring this story up because what I really appreciate about the ethos of this record was that, conceptually, we always had front and center the desire to play music that would give people the opportunity to understand the intricacies of improvisation. And so a phrase that came up time and again for us in the studio was, “Retain Interest.” Is this music at every movement retaining interest of people? In this age of music, where abstract music is less accessible (compared to, say, what Monk was playing), a lot of people shut down in 20 seconds because they can’t understand it. And so we wanted to take that concept and say, “We’re still going to play alternate chords and whatever, but we’re also going to have melodies that folks can sing along to.”

One of the deepest memories of making this record was watching my wife, who sings but certainly wouldn’t describe herself as a vocalist, play along on an air piano to my solo. That was really special, this notion that the solo was something that was sing-able in addition to the melody itself. 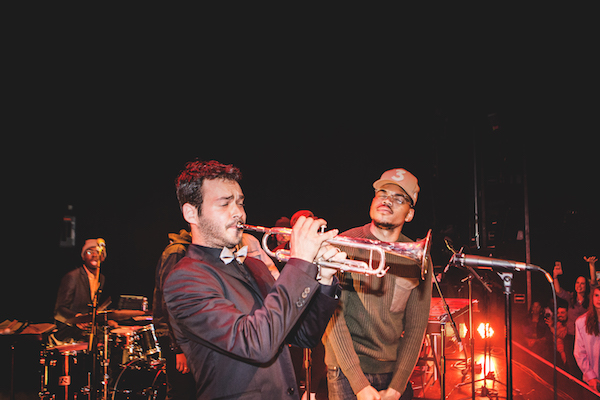 In terms of influence, which came first, jazz or hip-hop?

Segal: To be honest, a lot of styles of music happened at the same time. Both of my parents are very musical people, and there was constantly music playing in my house, ever since I can remember. Specifically, a lot of Latin music. I’m part Cuban, so there was a lot of Cuban music playing in my house growing up. Obviously, the great singer-songwriters and the classics like Stevie Wonder and The Beatles and James Brown and Curtis Mayfield. But really my love of jazz didn’t come until high school, when I started taking my instrument more seriously. I just became totally enraptured by jazz, by the jazz spirit. At that time I was constantly going around the city, going to jam sessions or just going to watch people play or doing various types of gigs and stuff. That was when I was first starting to learn standards and learn how to solo over chords and stuff. But I was also very much into hip-hop at the time, and not necessarily just what was on the radio. I liked hip-hop artists that had the spirit that I felt so connected to through jazz.

And who were some of those hip-hop artists?

Segal: Well, Biggie. I remember transcribing Biggie’s flow as if it were a Freddie Hubbard solo. And trying to rap along to the cadence, and picking out different notes and trying to slip in and out of his changes. So he was one of the first rappers that I felt that musical connection to, like he was playing a trombone of sorts, or like he plays trumpet. The other one would be Lauryn Hill, just because of how musical she is, how incredible her voice is, how she kinda goes in between the style of rapping and singing. That was very melodic to me, very jazz to me.

At the time a lot of my friends that were into hip-hop weren’t listening to jazz as critically as I was, but I would turn a jazz song on they would be into it, or it would remind them of a song that they would be into. Especially the more modern stuff. Like I remember listening to SFJAZZ Collective a whole lot. They had this album called The Music Of Stevie Wonder that just felt like something apart from anything I’d heard. At the time it felt so important for me to have this different style of jazz music that I was hearing. Clearly, people that were insanely talented on their instrument, but using their powers as a collective and for good and kinda bringing each other up. It was that world that I felt like covered that line of hip-hop and jazz and all these other things.

Reid: I am tempted to say jazz, but man, you couldn’t tell me nothing about Lupe Fiasco in high school. I mean, I was so deep into all of his mixtapes and albums. But I grew up playing classical, did classical for 12 years. And I remember getting to a point in high school where I thought, “Man, I’m playing classical, I love piano, but I just don’t love classical music.” I wasn’t listening to the cats I needed to be listening to. I wasn’t listening to the right songs. I was playing piano competitions, winning awards, and doing well, but I felt disconnected.

But for some reason, come Christmas time my soul would get happy, because my parents would turn on Vince Guaraldi, and I would get the transcriptions of Guaraldi’s solos from the Charlie Brown records. And I always felt so excited to be playing that. I couldn’t really get it, and I didn’t know what it was, but it was just cool for me. And so I bought some more records, Kind Of Blue, Smokin At The Half Note, and then Know What I Mean by Cannonball Adderley and Bill Evans. Man, Nico and I would listen to all those records a lot, in the car driving around the city. And that was so fundamental to me.

As time went along I realized that there was this overlap with hip-hop, and I still remember how I felt when I heard Tribe’s “We Got The Jazz.” Man, those cats were on to something. And then, all bets were off once I heard Robert Glasper. That really changed the game for me, where I could tell that these worlds were meldable, like I could put them together. 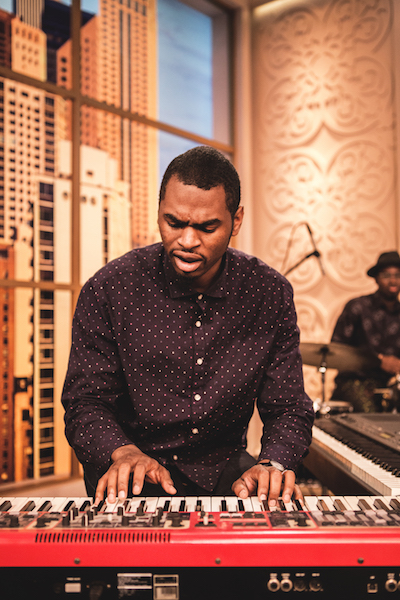 But the JuJu’s blend of jazz and hip-hop seems special. The songs on the album aren’t straightahead covers of Tupac songs, nor are they simply jazz standards played over hip-hop beats. They feel entirely organic yet well-produced at the same time. How did these pieces come together?

Reid: Sometimes the tune would emerge organically from just jamming for 10 to 15 minutes. Nico would stay, “All right, stop playing.” And then he would just sit at the computer and start chopping. And he’d say, “OK, that was a special moment, that was a special moment. Hmmm, let’s build a melody on this, or let’s stack this and make a counterpoint to a melody.” It often times just started with unstructured noodling.

Some songs we decided to record in darkness. I think that Nico was the one who decided to turn the lights off in the studio. We wanted to be patient with each other and really—not just gesture toward the great tunesmith stuff—but really try to carry forth that spirit of knowing the music so well and also knowing the people who you’re playing with. To the point that you don’t need to look at them, but can still really see each other.

Siegal: In the last couple years I’ve been working more so on being a producer. As a trumpet player I haven’t had this kind of outlet in a couple years. And I really missed aspects of playing jazz music or just improvisational music and being able to kinda stretch on my instrument, and these songs really came about as organically as can be, from real jam sessions between the four of us. It really came about from every angle and direction. And we tried to just honor all that in the spirit and the style of abstract music or instrumental music. And we tried to just own that feeling and produce around that feeling more so than “Let’s turn everything into a beat.”

Genre certainly doesn’t seem to be prohibiting you from pursuing your vision, Nico.

I really pride myself on not being able to be labeled a jazz trumpet player. Because I do a lot more than just play jazz music. And I love a lot of styles of music, and I feel like that’s the true essence of recorded music is and arguably improvisational music. It’s that sincere expression, and I feel like if you’re honest, then all of those things that are inside, all those styles that you’ve listened to, all those songs that you’ve heard on road trips, come out of you. So I love that our album isn’t just a jazz album. I love that it’s not just a hip-hop album. I think it’s part of what makes it unique, what makes it work. DB