“This has been years in progress,” Christian Scott aTunde Adjuah announced to the Harlem Stage Gatehouse’s standing-room-only crowd at the end of his closing set of the two-night Stretch Music Festival, a showcase for artists associated with the activist trumpeter’s eclectic Stretch Music record label. The festival claimed a stated goal of “bringing millennials back into this music” and providing “a reservoir for young creativity.”

To that end, the festival’s second night of music on Feb. 18 was a five and half hour marathon, starting off with an invigorating set by the band Butcher Brown, a soul drenched quintet that unabashedly describes itself a “throwback to the great progressive jazz bands of the ’60s and ’70s.”

Powered by the authoritative drumming of Scott collaborator Corey Fonville and featuring the tenor saxophone and trumpet playing of Marcus Tenney, the group’s set recalled the music of a bygone era.

The group’s opener, “Remains To Be Seen,” quickly displayed the cohesion of the unit, as keyboardist Devonne Harris, guitarist Morgan Burrs and electric bassist Andrew Randazzo melded together to create a multifaceted sonic tapestry driven by Fonville’s explosive rhythms and ignited by Tenney’s exciting sax solo. The mood mellowed with the ethereal sounds of “Fiat,” then amped back up on “Truck Fump,” a feature for Randazzo’s funky bass and Burrs’ Hendrix toned guitar.

The group conjured up a “quiet storm” on “The Healer” and “Virginia Noir,” which found Tenney soloing capably on trumpet and Burrs delivering a Benson inflected improvisation, and closed with “Tunnel Vision,” an episodic excursion that melded the sounds of Earth, Wind and Fire and Weather Report into its own funky blend.

Visionary vocalist Sarah Elizabeth Charles opened her set with a solo improvisation that clearly identified her as one of the music’s most innovative voices, channeling her vocal through a TC Helicon Voice Live effects processor to create an ethereal sonic atmosphere. Joined by her band SCOPE—keyboardist Jesse Elder, electric bassist Burnis Earl Travis II and drummer Jon Davis—Charles sang her neo soul ballad “Learn How To Love” in a warm and beautiful natural tone.

The rest of the set was devoted to songs from her upcoming release, Free Of Form, beginning with the album’s title track and moving on to three more of the project’s original compositions, “White And Blue,” “America” and “March To Revolution,” with Charles delivering her socially conscious, politically charged lyrics in a genre-bending style.

The evening’s penultimate set, by longtime Scott collaborator guitarist Matthew Stevens, was yet another mind-expanding expedition, combining elements of jazz and rock. The trio—featuring the versatile rhythm team of electric bassist Zach Brown and drummer Eric Doob—opened with “Picture Window,” a Stevens original that had a decidedly Hendrixian melodic line.

A rhythmic tap-dancing sample kicked off “Reservoir,” a piece from his upcoming Preverbal disc, and the song unfolded to display a subtle melodicism. On “Cocoon” the group combined ambient and dissonant sonances, while on “Sparkle And Fade” they demonstrated their capacity for straightahead swing. Their set-closer, “Dog Eared,” found Stevens unleashing a tornado of swirling chords. 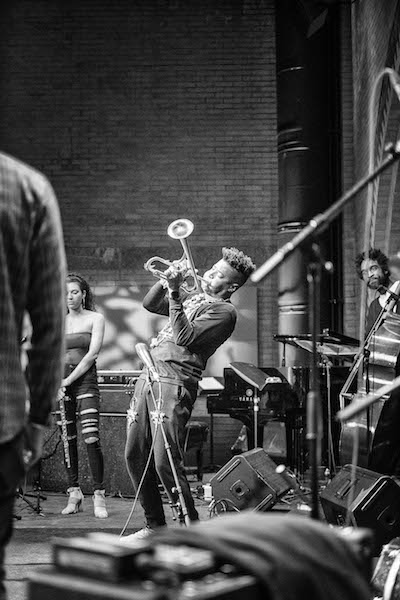 Christian Scott (center, with trumpet) says the goal of the Stretch Music Festival is “bringing millennials back into this music” and providing “a reservoir for young creativity.”

The expansive set opened with Scott’s “R. Groid” that had Fonville hammering out metallic space-age rhythms on a Roland SPD-SX Sampling Percussion Pad as Elena Pinderhughes’s reverberating flute soared above the funky beat of his booming bass drum. Scott stepped to center stage holding his signature upturned-bell trumpet before spitting out a flurry of high notes, then dipped down into the horn’s low register, harmonizing globs of sound with Pinderhughes’s flute

Charles joined the ensemble on the forlorn anthem “The Walk,” her warm tone expanding the frontline’s tonal palette (the song that also featured Cook’s distinctive alto). Stevens and Dyson sat in with the group for “West Of The West.” The song began with a rocking solo guitar improv from Stevens that soon that gave way to a psychedelic interlude. A bluesy melody came next, followed by powerful guitar, Fender Rhodes, acoustic bass and drum solos.

The energized set concluded with the sextet performing Scott’s “The Last Chieftain.” Dedicated to Scott’s late grandfather, Big Chief Donald Harrison Sr., the song featured Fonville’s infectious New Orleans Black Indian rhythm and a soulful solo by Cook. Pinderhughes followed with an airily swinging flute solo and Scott, who blew with inspired abandon, threw his whole body into an impassioned statement that began pensively, then wrapped things up with skyrocketing blasts from his horn. DB