Three Nights with The Necks in NYC

Luminaries in Australia, the Necks have only begun to build a following in North America in the last decade. It’s enough, however, that they were able to mark their 30th anniversary with three nights at Brooklyn’s Issue Project Room on February 23–25 (preceded by a pricey benefit concert for the venue) as a part of an eight-city American tour.

Their residency built gradually, as their individual sets generally do, beginning with short solo concerts and then a trio on the first night; two trio sets on the second followed, and the run concluded with a five-and-half hour round-robin with an assortment of guests on the third night.

Just as the air can be heavy with anticipation before one of their trance-inducing sets, there was a haze of wonder at the beginning of the first night when the lights went down with no mention of who would play first. At some length, Buck walked onto the floor, lit by projections of leaves dancing in the breeze. He triggered a spinning, two-armed stand bedecked with ropes and weights and started putting objects in its path, creating clumsy percussion loops, a rattle and clang as he slowly intoned a bell. He then picked up an electric guitar and rattled it about, more playing the body than the strings, showing the tastefulness of a percussionist over the dexterity of a guitarist.

It was very nearly an installation piece; it almost didn’t need him. Even when he put the guitar under the robot and played muted murky drums, it felt more like an atmosphere than a performance. 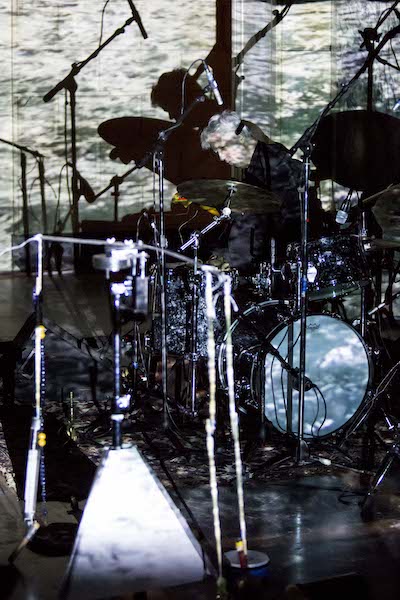 Tony Buck of the Necks performs against a projection of dancing leaves during a set at the Issue Project Room in Brooklyn on Feb. 23. (Photo: Cameron Kelly)

Abrahams played next. Although he does a variety of things outside the band—employing electronics and altered instruments for example—he settled into resonant, Necks-like clusters as if he couldn’t resist engaging the voice of the big Yamaha concert grand. He quickly fell into fast repetitions with the piano miked enough to magnify the natural resonance of the smallish, marble-walled room. He played thick clusters out of which single, repeating notes would arise, almost as if he was playing to a prerecorded track.

Swanton’s activities outside the band are the least known in this hemisphere, but he put out a wonderful double-CD set entitled Ambon in 2015 that is worth seeking out. With that and his work with the Catholics and other side projects, he would seem to have the most jazz leanings of the three.

But here he played a study in extended bowing of open strings and multiphonics, gently caressing the strings without depressing them. A brief passage had him tapping the body of his bass and clicking an effect pedal as quickly as possible, seemingly just for the sound of it, eventually mixing in some open-string controlled feedback.

As is ever the case with the Necks, it’s hard to categorize the three sets they played as a trio. They seem to build the same house over and over, and yet it comes out different on each occasion. Despite aural appearances, a lot can go on within a few minutes of Necks time

The second set of the second night, for example, began with a lovely, extended piano solo, not quite on a theme but very much of a mood, a wistful melancholia that Abrahams resolved into a repeating chord. Lloyd matched him with single, pointed notes in a tight strum on the neck, and Buck soon answered the complementary patterns with a handheld gong.

From the lyrical intro, all had become rhythm within a matter of minutes. Buck and Swanton settled on a close interval and Abrahams introduced a new melodic line, playing at the lower depths of the keyboard and dropping a single “out of key” note below the tonic. It was a remarkable tension and another unexpected direction. 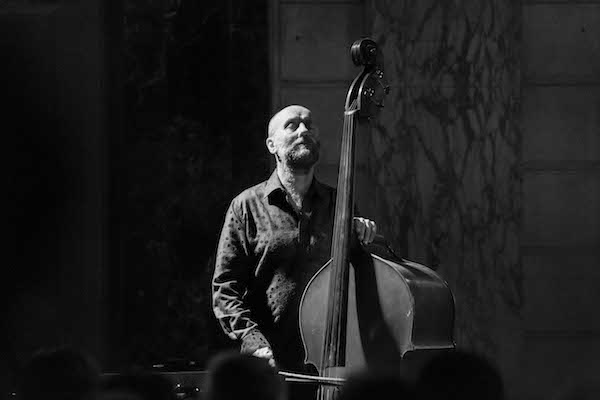 The key to the trio—as on a good Art Blakey side—is often the drums. Buck is a precise timekeeper and can hold steady on a quick cymbal count for a very long time, while simultaneously drawing circles around it. Abrahams and Swanton might pull the ears, like the melodic interplay of Lee Morgan and Wayne Shorter, and both can make you think you’re hearing phase or delay by varying dynamics within their repeating clusters. But there is a soft, quick and unerringly steady underpinning in the drums, less simple than it might seem.

Eventually, as they reach the apogee of their expansive arc, there is often more information than one can process. At that point, it becomes resplendent, transcendent, somewhat psychedelic.

Like the first two days, the first hour of the final “Timeline” marathon was a steady incline, an uninterrupted quarter of a day beginning again with the trio and moving quickly into a raucous section with Buck, bassist Joshua Abrams and Yo La Tengo guitarist Ira Kaplan, which peaked quickly and dissolved into a soft growl. Then, 10 minutes after Kaplan had walked onstage, vocalist Shelley Hirsch joined in with bird songs. Three minutes later, Andrea Parkins joined them with a laptop and an array of handheld sound makers.

Within a couple more minutes, Abrahams and Buck had exited (the latter having laid skitters and grooves for a solid 80 minutes), leaving the first non-Necks band of the day to their own devices—which turned out to be some fairly noisy improv. Hirsch at one point held a notebook, scribbling as she sang scattered phrases as if a satiric take on spontaneous composition. Parkins soon switched to accordion and electronics for a passage that moved from dream state into a new and fairly desperate form of sea shanty, pushed into banshee territory with the entrance of trumpeter Nate Wooley.

Wooley held position until the personnel broke down to a grubby and intuitive duet between himself and David Watson on bagpipes, which proved to be one of the highlights of the long, real-life mixtape. As it concluded at the 150-minute mark, they drew the only scattered bit of applause until the long set concluded. 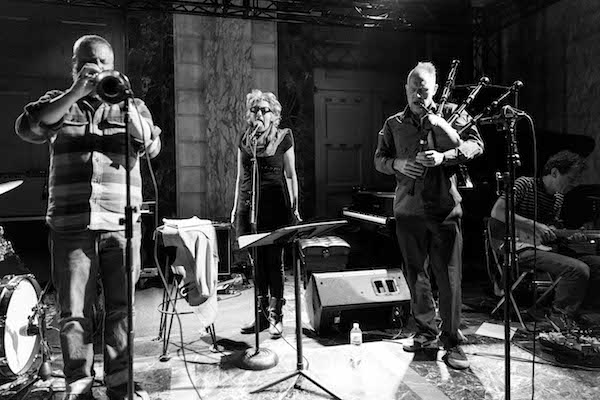 Abrahams returned to demonstrate his jazzier side in groupings with Kaplan, Swanton, Wooley and Ned Rothenberg, the latter even quoting “God Bless The Child” at one point, and then with Buck’s return entered into a full-on blowing session. That didn’t last long, however, before the amplified strings took over (Watson, now on guitar, and Kato Hideki on bass) in a trio with Buck for some grind and thrust that hit hardcore punk and heavy skronk proportions. At precisely 9:00 p.m., Abrahams and Swanton rejoined the conflagration with a remarkable six-minute crossfade that left the core trio with a rumble.

It would have made perfect sense to settle into another 45- or 60-minute Necks-set to conclude the evening, but instead the carousel kept turning. Everyone was brought back out in two final rotations that came off sounding—if nothing else—a bit like Alice Coltrane. Rarely in the proceedings had the improvisations flown out of control. Even when they constituted a minority of the stage personnel, even when they weren’t onstage at all, their unique aesthetic served as an ethos, proving that after 30 years, the Necks are still really good at being the Necks. DB