Who Was Bix? Beiderbecke Museum Has Answers

You can count the number permanent American museums dedicated to the career of a single jazz musician on the fingers of one hand—and still have fingers to spare. There is the Louis Armstrong House Museum in Queens, New York, which is perhaps the most famous. Yet there is no Museum of Ellington, nor of Charlie Parker, Count Basie, Benny Goodman, Billie Holiday nor, as yet, Miles Davis or John Coltrane (though plans have been announced for the last two).

By the end of August, however, there will be at least three. And two of them will be in Iowa.

That is when the new Bix Beiderbecke Museum in Davenport will showcase the state’s most fabled and mythic personification of early jazz and the jazz life of the 1920s Jazz Age. It will join will join the Glenn Miller Museum 280 miles west, in Clarinda, which has memorialized the birthplace of the famous bandleader and contemporary of Beiderbecke. Over the weekend of July 22–23, in a ceremony attended by about 100 people, the ribbon was cut for the Beiderbecke Museum, although it will not actually open to the public until Aug. 3, the first day of the 46th-annual Bix Jazz Festival. 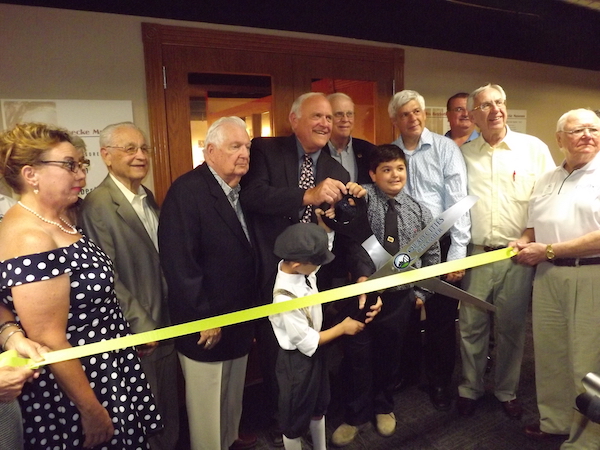 Beiderbecke is museum material on several levels. In jazz history, his music stands as the first fundamental alternative in style and sensibility to Louis Armstrong. Each musician recorded his definitive performances about the same time in 1927–’28, and the contrast remains stark. In “West End Blues” and “Tight Like This” Armstrong is hot and passionately dramatic. In “I’m Coming Virginia” and “Singing The Blues,” Beiderbecke is reflective and coolly elegant. In offering an alternative vision of what jazz could be, Beiderbecke opened one of the two great paths into jazz’s future.

Armstrong went on to a long career and international fame. But Beiderbecke’s life would be short—dead at 28 in 1931 from complications of alcoholism. Beyond a close circle of admiring musicians in his time, his public was relatively small and his life largely anonymous. His fame would develop posthumously, starting first with his musical reputation, as his fellow sidemen of the 1920s (Benny Goodman, Bing Crosby, Tommy Dorsey, Glenn Miller and others) became great stars in the ’30s and talked about Beiderbecke often with both humor and reverence. In 1936 Victor’s Bix Beiderbecke Memorial Album became the first album-form reissue in jazz history.

Who was this man, Beiderbecke, the world began to wonder? Where facts were lacking, imagination filled in color and details. Beiderbecke’s memory began to evolve beyond music into the larger realms of iconography, symbol and legend. A decade after his death, he morphed into perhaps the first of a particular archetype in 20th-century popular culture—the tragic romantic hero, cut short of great potential by some mysterious defect hidden deep in the fog of character. Such people are endlessly fascinating and puzzling to us because they are such gifted and maddening paradoxes of behavior. Beiderbecke was a uniquely American expression of what Byron, Shelley and Keats had been to English literature, and soon enough the Beiderbecke story would become the matrix for a succession of similar American stories across jazz, rock and literature: Billie Holiday, Charlie Parker, Janis Joplin, Jimi Hendrix, Jack Kerouac. Kurt Cobain and many more.

The Beiderbecke Museum exhibit gives passing notice to his alcoholism but does not dwell on the tragic-romantic story line. Instead, it celebrates his music, his times and his connections to Davenport, which nearly 90 years after his death remains itself a kind of extended museum of his life and times. His family home at 1934 Grand Avenue remains a Rockwellian picture of middle-class stability, though in need of some maintenance. His gravesite in nearby Oakdale Cemetery is a regular stop on any local Beiderbecke tour, and the funeral home in which he lay in 1931 is now a radio station. Also, at least three local ballrooms in which Bix played as a young man still stand in downtown Davenport.

Even the building that houses the Museum has a past. After nearly 20 years of work, the gallery of historic Beiderbecke artifacts and memorabilia occupies 1,500 square feet of the equally historic Von Maur Department Store building, built in 1892 on Second Avenue at Main Street two blocks west of the Mississippi River. The building was reclaimed and restored in 2003 by Davenport’s River Music Experience, a music venue and educational institution whose CEO, Deb Powers, expressed pride at hosting the Museum.

The permanent Beiderbecke collection, which includes rare photographs and home movie footage of the cornetist and many original 78 rpm Victor and Okeh records donated by trumpeter Randy Sandke, is housed in the lower level of the building. Among the first things one sees going in is the only piano Beiderbecke ever owned. The story of its history from Beiderbecke to the Museum, as told by Howard Braren, President of the Bix Society, had all the happenstance and intrigue of the Maltese Falcon’s journey from Charles V to Humphrey Bogart.

Among the participants in the 30-minute ribbon cutting were Albert Van Tieghem, whose foundation will guarantee half of the museum’s first three years of operating expenses; and Liz Beiderbecke Hart, Bix’s great niece, whose collection of family letters, photos and artifacts, originally assembled by Bix’s parents in the ’20s and ’30s, has passed to her and now forms the cornerstone of the museum collection. Bix’s hand-written letters to home begin in his pre-teens and end with a scribbled, unfinished note on July 30, 1931, a week before his death on Aug. 6.

Hart explained that the Museum and the Bix Beiderbecke Memorial Society are separate operations with separate but interlocking boards. The Society was founded in 1972 and is principally responsible for the annual Bix Jazz Festival. Efforts to create a Bix museum began in 2007 with a partnership with Davenport’s Putnam Museum of history and science, but collapsed over funding issues. In 2011 Hart sold the family archive to the Beiderbecke Memorial Society, which in a separate move also acquired all the research—nearly 50 boxes full—of the research materials assembled by Beiderbecke biographers Phil and Linda Evans. The combined archive is divided between the Beiderbecke Museum and rented space in the Putnam Museum, which houses the Evans materials and makes it available to researchers.

Others in attendance included Geri Bowers, a Beiderbecke historian; Maggie Condon, daughter of guitarist Eddie Condon; and Hank O’Neal, who recorded Condon for his Chiaroscuro label in the ’70s and contributed several items to the Museum collection. Dan Morgenstern, former DownBeat editor and head of the Institute for Jazz Studies at Rutgers, was expected but was recovering from a minor illness in New York. DB