Spirituality was an enduring theme in the musical life of Alice Coltrane (1937–2007), the pianist, harpist and widow of legendary saxophonist John Coltrane. To listen to her recordings—particularly those from the late 1960s and early ’70s—is to find an artist in enthusiastic pursuit of music’s transportive qualities. This search was particularly evident toward the final stage of her life, when she became the leader of the Sai Anantam ashram, a 48-acre spiritual retreat in Agoura, California.

It was there, at the close of the 20th century, that she would dedicate her life to composing music for religious ceremonies and Vedic meditation in accordance with the Hindu faith to which she ascribed, adopting the name Swamini Turiyasangitananda, Sanskrit for “the highest song of god.”

At the Knockdown Center in Queens, New York, on May 21, jazz fans and spiritual seekers alike convened to participate in a religious ceremony much like the one Coltrane would have presided over at her ashram. The event, which served as the closing concert of the 2017 Red Bull Music and Arts Festival, offered music of a similarly transportive bent, courtesy of the Sai Anantam Singers and a late-night set by Alice and John’s son, the acclaimed saxophonist Ravi Coltrane.

The occasion was held partly as a celebration of the release of a new collection of Alice’s works, World Spirituality Classics 1: The Ecstatic Music Of Alice Coltrane Turiyasangitanand. (For a review, see the Beyond column in the July issue of DownBeat.) Released by the California-based label Luaka Bop, the compilation was culled from a series of cassettes that Coltrane recorded for distribution at the ashram but never intended for wide-scale release.

Consisting entirely of original compositions—and featuring her first singing credit—the music within is a fusion of two spiritual traditions, in which the Sanskrit lyrics of traditional Vedic music are molded to fit the contours of African American gospel and soul. It’s a hybrid that could only have come from Coltrane, a jazz musician who developed her musical language in the Christian church and would later become a devoted Hindu follower.

Her turn toward that religion came about after the death of her husband, in 1967, a tragedy that left the widow Coltrane with four children to raise on her own. After months of depression and anxiety—which included taking a vow of celibacy—she found respite in the teachings of Swami Satchidananda, the Indian guru best known for delivering the opening invocation for the Woodstock Festival in 1969.

Inspired by his mentorship, she founded the Vedantic Center in San Francisco in 1976, and in 1983 relocated the ashram to Agoura. With a following of 30 to 50 students, she would hold a sunset ceremony every Sunday afternoon at the ashram’s temple, playing the organ as the sun dipped below the horizon. 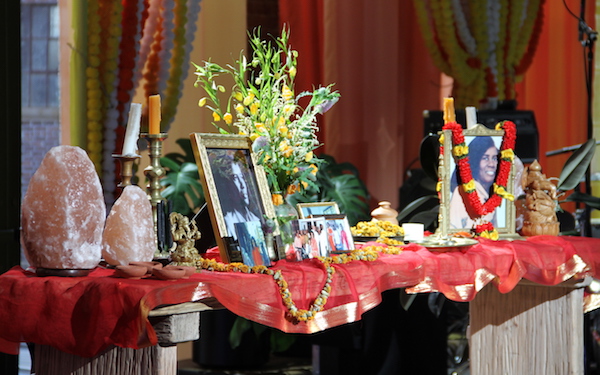 A table decorated with photos of Alice Coltrane and objects from the ashram (Photo: David Levine)

A sliver of that ceremony was replicated at the Knockdown Center, where a stage was positioned in front of massive picture windows, which revealed, through sheer red and orange drapes, a cloudy New York sky. A portrait of Coltrane hung suspended above the stage, and a candle-laden shrine was erected stage-left.

Backed by a keyboardist, bassist and drummer, the Sai Anantam Singers, led by musical director Surya Botofasina, were electrifying in their vibrant gowns and white garments. For nearly two hours they sang the music of Alice Coltrane with fervent passion and religious zeal—if not always meticulous pitch. The soul-bearing melodicism of African American gospel music was a governing force, informing the harmonic coloration and rhythmic character of the songs. At times the underlying grooves would approach the spacey thrum of Sly & The Family Stone or Parliament-Funkadelic.

The trance-inducing repetition of Indian devotional elements was another cultural touchstone, as was the bittersweet timbre of American soul. That combination played out in often surprising ways. One piece featured a male vocalist intoning the basic principle of Hare Krishna Consciousness—“Chant the name of the Lord/ Chant the name of God”—in a tone and cadence reminiscent of a Sam Cooke ballad.

Another track, featuring the repetition of a compact rhythmic refrain, was undergirded with a groove so smooth and punchy that it would have been at home on a mid-’90s commercial r&b track. 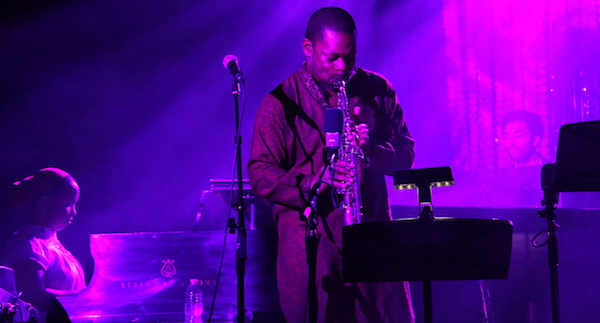 Reprising material from Alice’s mid–’70s and early ’80s discography, this performance expanded on the consciousness-expanding mysticism of the first, though with a distinctly modern-jazz flair. Virelles was exceptional on the opening number, the grooving “Journey To Satchidananda,” on which he interspersed warped, keening synth notes with chirpy linear lines.

“Jagadishwar,” meanwhile, was liquid and slow, with curtains of synth and a shimmering backbeat by Watts. The song featured an appearance by two dancers, who interpreted the melody through graceful twists and turns.

They were hardly the only ones moved by this performance. As Ravi continued to channel his mother’s spirit throughout the night, the band became freer and more cathartic, and the audience began to synchronize with the music’s vibrations. By the time the ashram singers joined Ravi for “Universe,” the feeling onstage—and in the crowd—was one of pure uplift: ecstatic and wholly in the moment. DB