Some of the most adventurous programming in New York during the span of a week in June took place at the Greenwich House Music School, an institution of social services, arts and education in the heart of Greenwich Village.

On June 23, vocalist Fay Victor led her quartet (Attias on alto and baritone saxophones, Anthony Coleman on piano, Ratzo Harris on bass, Devin Gray on drums) through a set of Herbie Nichols’ music, and on June 29, pianist Matt Mitchell performed solo and in duos with mentor and alto saxophonist Tim Berne.

The Sound It Out series concluded on June 30 with “Monk on Guitars!” featuring nine of the most innovative six-stringers on the New York scene today. Organized by guitarist Rez Abbasi, this unique gathering, meant to commemorate the upcoming 100th anniversary of Thelonious Monk, was dedicated to the late pianist-composer Geri Allen, who died June 27. Abbasi fondly remembered her as “an incredible interpreter of Monk’s music.”

A round-robin event, “Monk on Guitars!” featured two players on stage at a time, with shifting rhythm-section tandems throughout the night. Abbasi and Steve Cardenas kicked off the evening with a romp through Monk’s giddy “Four In One,” accompanied by bassist Stephan Crump and drummer Mark Whitfield Jr.

Abbasi’s impressionistic solo guitar intro had him experimenting with some backward guitar effects while alluding to the tricky head before the band collectively jumped on the theme. Cardenas’ comping was suitably fractured, and his harmonized lines with Abbasi on that near-impossible, cartoonish line sounded like a hipper version of the Allman Brothers front line. Both guitarists turned in remarkably fluid solos—Abbasi tipping at times into the Holdsworthian legato zone—as Crump and Whitfield balanced the frantic music with cool, swinging restraint.

Miles Okazaki then replaced Abbasi and joined Cardenas on the challenging “Evidence,” a quintessential example of rhythmic displacement based on the standard “Just You, Just Me.” Whitfield, who was beaming behind the kit on this tune like a young Billy Higgins, caught all the crisp hits on the herky-jerky head while Crump dug in on some deep walking bass lines through the solo section. Okazaki flew over the changes with fleet-fingered impunity, deconstructing the tune with angularity as Cardenas comped authoritatively behind him.

Anders Nilsson, replacing Cardenas, then joined Okazaki on one of Monk’s most beautiful and enigmatic ballads, “Crepuscule With Nellie,” accompanied by Jerome Harris on acoustic bass guitar and Colin Stranahan on drums. With Okazaki affecting a pianistic approach on his chordal solo intro (playing a Gibson ES-175 with single Charlie Christian pickup) and Nilsson providing some metallic sheen (with his Les Paul gold top), the two guitarists blended beautifully with contrasting tones on the alluring melody. Like Monk’s original, it was played straight through without improvisation. 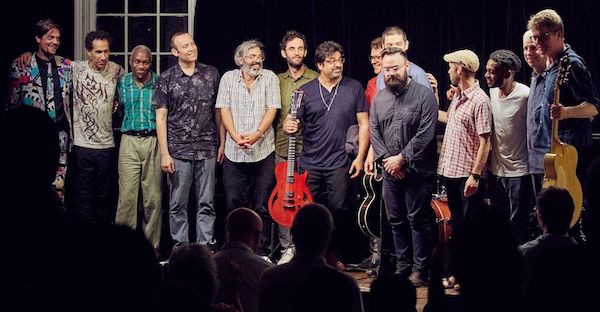 The real find of the evening was Mike Baggetta, a kind of post-Frisellian sonic explorer who brought an audacious touch to the proceedings with his wild whammy-bar articulations, crazy harmonizer effects, ambient looping and rippling arpeggios. His renegade approach to Monk’s playful “Locomotive,” performed with Nilsson, Harris and Stranahan, was full of subversive surprises and yielded new possibilities for Monk’s timeless music.

David Gilmore then replaced Nilsson for an innovative 5/4 Afro-Caribbean take on “Epistrophy,” which was propelled by Harris’ bass lines and drummer Richie Barshay’s insistent swing on the 4/4 bridge. Following a flowing, warm-toned solo by Gilmore on his trusty Gibson ES, Baggetta delivered an abrasive six-string assault full of hellacious skronking, string-scraping and a general hornets’ nest of fuzz-toned dissonance that headed into Sonny Sharrock territory.

Gilmore and Liberty Ellman then cooled down the proceedings with a gorgeous reading of the Monk ballad “Ask Me Now,” underscored by Barshay’s sensitive brushwork. This performance was more about nuanced phrasing and finesse, as the two guitarists blended voicings with lush chords and interwoven lines. Ellman’s Pat Martino-esque solo revealed his inner bebopper, while his rich chordal work behind Gilmore’s cleanly picked solo showed a Joe Pass influence. Crump’s bass solo here followed the contour of the familiar melody while filling in several cracks.

Abbasi returned to join Ellman on a bop-flavored romp through “We See,” which was fueled by Whitfield’s unerring, swinging pulse. The tune concluded in classic bebop fashion with the two guitarists trading exhilarating eights with the exceptional young drummer.

Julian Lage and Nels Cline, sans rhythm tandem, next explored their indelible chemistry together on one of Monk’s most idiosyncratic numbers, “Jackie-ing.” With Cline playing a beautiful D’Angelico guitar and Lage playing a Fender Telecaster, the pair extrapolated on the theme with contrapuntal lines, sounding at times like an intricate Bach partita. As the piece developed, they slipped into some dissonant flurries and furious strumming that sounded like a page out of the Derek Bailey book. Their re-imagining of Monk’s “Played Twice” was similarly compelling and wholly personal.

Three guitarists—Gilmore, Cardenas and Nilsson—then performed a luxurious rendition of “Monk’s Mood,” underscored by Stranahan’s gentle brushwork. Cardenas, who is no stranger to playing with two other guitarists, having done so in Paul Motian’s Electric Bebop Band and more recently in Steven Bernstein’s Blue Campfire band, played a typically tasteful solo on this beguiling ballad. Gilmore’s solo was warm and alluring while Nilsson added a steely-toned edge on his blues-tinged solo.

Next up was the triumvirate of Lage, Baggetta and Ellman, accompanied by Crump and Barshay on Monk’s “Light Blue.” Following an impressionistic, rubato intro, they all fell into the familiar theme with an off-kilter swagger, like a group of drunken sailors staggering down the street. Baggetta’s wacky pedal-steel guitar effects lent an appropriate seasick quality to this cockeyed interpretation, while Lage resorted to a more Django-esque approach on his effortless filigrees and Ellman alternated between dizzying Django lines and deliberate deconstruction.

For a spirited finale, Okazaki joined Abbasi and Cline on a radical re-imagining of Monk’s “’Round Midnight,” accompanied by drummers Whitfield and Barshay. Okazaki kicked off the proceedings with a repetitive ostinato that recalled Philip Glass’ “Einstein On The Beach.” Abbasi and Cline both showcased their sensitivity and virtuosity as they delved into the actual melody, and the band concluded with the classic Dizzy Gillespie Latin-flavored coda that has since become a standard part of the Monk repertoire.

All the musicians, who donated their time and talent for this benefit for the Greenwich House Music School, revealed rare camaraderie as well as a collective willingness to push the boundaries of Monk’s music throughout the course of this memorable evening. DB